Radiation injury is a problematic side effect in cancer treatment, and radiation toxicity from radiological and nuclear devices has been a growing national concern since 9/11. 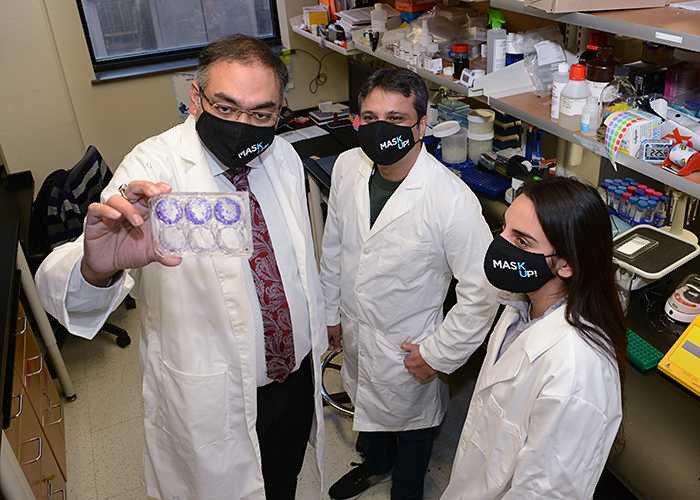 Not many scientists can claim to be working full-time on both improving cancer treatment and fighting the effects of bioterrorism, but Subhrajit Saha can.

Saha, Ph.D., is an associate professor and director of basic science research in the Department of Radiation Oncology at the University of Kansas Medical Center. He has spent the last decade trying to figure out how to lessen the injury that radiation treatment causes to normal tissues that lie in the path of the X-ray beams targeting malignant tumors. What he and his colleagues learn by solving those biological mysteries also can be applied to help people injured by radiation exposure in the event of a nuclear accident, missile or bioterrorism.

“Science has this advantage, that if you allow your knowledge to go outside the box, it can find new problems to solve,” said Saha, who is also part of the cancer biology program at The University of Kansas Cancer Center.

In the summer of 2022, Saha’s laboratory at KU Medical Center, along with collaborators at Children’s Mercy and St. Louis University, was awarded a five-year, nearly $3.6 million grant from the Radiation and Nuclear Countermeasures Program (RNCP) of the National Institute of Allergy and Infectious Diseases. NIAID is the lead institute within the National Institutes of Health for the development of medical countermeasures to mitigate and treat radiation injuries. This is his lab’s second consecutive grant from the RNCP, and they are the only research group in Kansas running a federally funded research program to develop a radiation countermeasure.

Radiation therapy, which causes DNA to break and cells to die, is much more efficient than chemotherapy in treating certain types of cancer. Nonetheless, some parts of the body, such as the gastrointestinal (GI) tract, are particularly susceptible to radiation toxicity and injury. Cells in GI tract renew themselves often, which means the cells divide often, making the intestines sensitive to radiation and more vulnerable to injury.

Organs such as the intestines are hard to avoid when treating someone with pancreatic or liver cancer. The result for patients is nausea, diarrhea, vomiting and abdominal pain. The impact of radiation-induced GI injury for victims of a nuclear explosion is even greater; it can cause sepsis and death within a few days.

There are no FDA-approved drugs to prevent or mitigate these injuries.

“It’s also painful for clinicians, because we want to treat [cancer patients] with our uppermost dose [of radiation], and we cannot,” noted Saha. “So that’s a fundamental question—how can we protect these organs without compromising the treatment itself?”

The researchers hope this new grant will help them find a strategy to mitigate radiation injury, specifically by blocking a particular type of macrophage from entering the tissue being targeted by cancer radiation treatment. Macrophages, sometimes called the Pac-Men of the immune system, are white blood cells that gobble up cellular debris while also releasing a variety of helpful proteins.

In 2016, Saha’s lab found that macrophages also can help repair and regenerate organs damaged by radiation by delivering proteins that stimulate cell proliferation and growth.

But macrophages are not all identical. They are all the same kind of cell, but they can acquire different functions. “It’s kind of like, you are the same person when it’s 45 degrees and you’re wearing a jacket as you are in the summer when you’re wearing a T-shirt,” said Saha. “But your actions change as you change attire. The same thing happens with these macrophages.”

The type of macrophage that Saha’s lab will try to block is an inflammatory variety, which is primarily derived from inflammatory white blood cells known as monocytes. These inflammatory cells do the opposite of what is needed for radiation injury: they make the injury more severe. Saha and his colleagues want to block the recruitment of circulating inflammatory monocytes to injured tissue by inhibiting their interaction with chemokines, biological chemicals released by the same tissue.

They plan to block it in two different ways, both using a mouse model. First, they will use gene editing to abolish the chemokine receptors located on the surface of the inflammatory cells. In response to radiation, these receptors promote the recruitment of inflammatory cells to injured tissue. Second, they will try using a drug compound, one that is already in clinical trials for another kind of cancer treatment, to inhibit the chemokine interaction with these receptors.

“If we don’t allow the recruitment of these [inflammatory monocytes] to the target tissue, like the intestine, we can inhibit inflammation and mitigate the radiation injury,” said Saha. “So, we can help the repair process.”

Unlike acute radiation injuries such as those intestines, which make themselves known in just a few days, injuries to the lungs from patients being treated for breast or lung cancer can take nearly six months to develop. The researchers plan to look at how their experiments affect the repair process on these chronic radiation injuries as well.

And what they learn in the lab to improve cancer care in the clinic could be used in a mass disaster or terror situation, a concern that has been mounting especially since 9/11, though Saha said he hopes his work remains confined to the clinic.

“We don't want any potential treatment to be required for that scenario because nobody wants there to be a nuclear incident,” he said. “Radiation was discovered for the betterment of mankind, not to destroy mankind. What we really hope for is that we can contribute this knowledge for the improvement of radiation therapy in multiple cancer types. That’s the overarching goal.”