When the Commission on Accreditation in Physical Therapy Education renewed the University of Kansas physical therapy program’s accreditation on Nov. 27, it marked the 75th anniversary of the program and nearly three-quarters of a century of continuous accreditation. 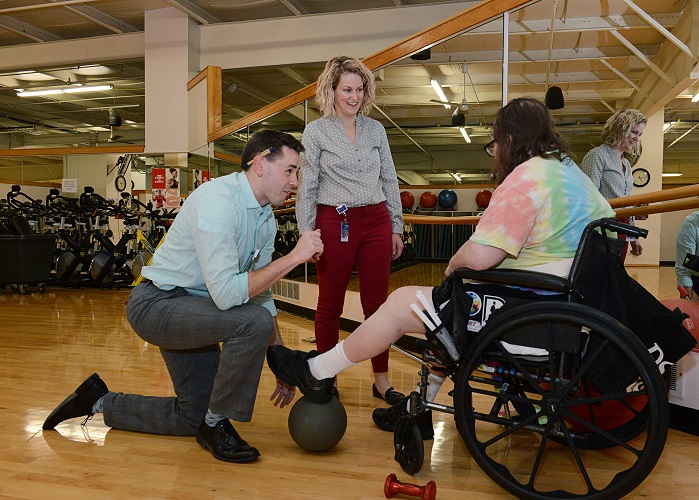 Scarlett Morris, PT, DPT, and a student work with a patient at the JaySTART clinic.

When the Commission on Accreditation in Physical Therapy Education renewed the University of Kansas physical therapy program's accreditation on Nov. 27, it marked the 75th anniversary of the program and nearly three-quarters of a century of continuous accreditation.

"KU has a tradition of excellence in graduating physical therapists," said Patricia Kluding, PT, Ph.D., chair of the Department of Physical Therapy and Rehabilitation Science. "We've had so much influence on physical therapy in the state of Kansas and on the field as a whole."

Not bad for a department that began in a shed outfitted with a blackboard, four chairs and two makeshift desks. In 1943, in response to polio epidemic, Harry Wahl, M.D., then dean of the KU School of Medicine, hired Ruth Monteith from the Mayo Clinic to create a physical therapy program at Bell Hospital, now the University of Kansas Hospital.

The first PT students were four sorority sisters from the University of Kansas campus in Lawrence, who took their first class in that shed in 1944. The program, then a certificate, was accredited by the AMA Council on Medical Education the next year, and the year after that, a bachelor's degree was offered, with three years on the Lawrence campus and the last year at the KU School of Medicine.

The program has continued to widen and grow ever since, despite sometimes barely having enough habitable space to exist.

In 1947, with 12 students in the incoming class, the department moved into a larger space, a converted storage room with a ceiling that leaked. The following year, when Monteith was told to suspend the program until the new Sudler building was completed, she instead found an empty classroom and set up shop. In 1952, when the class grew to 20 students, the department took over a lean-to structure that had once housed the mailroom, complete with yet another leaky roof and little climate control, before moving to the newly finished Sudler Hall.

In 1974, the department moved from the School of Medicine to the new School of Allied Health, now the School of Health Professions, and students completed the entire program on that campus. In 1998, 10 years after becoming one of the first programs in the country to offer an entry-level master's degree in physical therapy, disaster struck again. Fire destroyed the PT teaching laboratory in Hinch Hall, which adjoined Bell Hospital. The lab moved to a room in the basement of Robinson Hall and later back to Sudler.

Today, the department offers two types of degrees: a research-oriented Doctor of Philosophy (Ph.D.) in rehabilitation science, and a three-year, practice-oriented Doctor of Physical Therapy (DPT). The DPT students also have the option of a joint DPT/MBA (master of business administration) or a DPT/MHSA (master of health services administration) degree track. Requiring this level of education reflects the growing responsibility of physical therapists as providers of health care. It also mirrors tremendous advances in orthopedics, oncology and neurology.

"Thirty years ago, for example, we didn't understand much about how the brain controls movement and neuroplasticity, how the brain changes," said Kluding. "Now we know if someone has suffered paralysis and has to re-learn to walk, it's important to teach them to walk, rather than have them do exercises while lying in bed, in order to establish that neurologic pathway."

Scarlett Morris, PT, DPT, clinical assistant professor, said she chose KU to earn her DPT in part because of its reputation; it consistently ranks in the top 10 public graduate schools for physical therapy by U.S. News and World Report and is a leader in the area of rehabilitation science.

Researchers in the department are studying such diverse topics as how exercise can improve vascular health after stroke, how sleep impacts chronic health conditions and how virtual reality can be used to improve rehabilitation outcomes.

The department is also exploring new ways of educating therapists, such as JaySTART, a clinic where students-in-training work under faculty supervision to deliver free care to underserved patients in Kansas City. Meanwhile, the Leveraging Education And Research iN Physical Therapy (LEARN PT) Lab specifically researches aspects of PT education.

"We are on the cutting edge of education delivery," said Morris. "There is always innovation in our department."

That includes a new degree: a master's degree in athletic training, to be offered in 2021. This program will educate athletic trainers who will work with athletes, sports teams and coaches.

This year's incoming class was composed of 5 Ph.D. and 59 DPT students. These students take classes in the medical center's Health Education Building, a 170,000 square foot training facility that opened in 2017, where they can learn alongside students training in other health professions they'll be working with someday. Also this fall, the department moved its teaching lab into new high-tech space in the KU School of Nursing building that Kluding describes with one word: "beautiful."

In October, the department celebrated its milestone anniversary with a special program at the annual Jessie Ball lecture, which was attended by alumni and former faculty. And this summer, Kluding had the opportunity to meet two former students of the program, who graduated in 1948 and 1951.

"They spoke fondly of their experiences in our program after all these years, and they remembered it, the anatomy and cadaver labs, like it was yesterday," said Kluding. "We're just really proud of that history."