Project Eagle parent gives thanks for her ‘found’ family 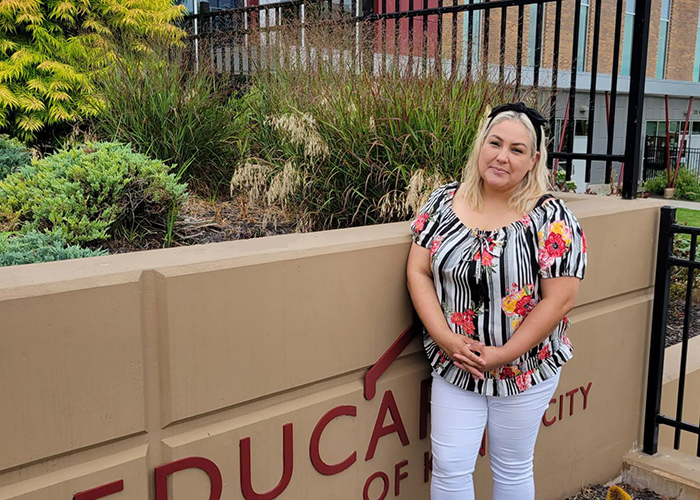 When the pandemic shut down businesses in 2020, Veronica Fernandez, a mother of seven, lost clients in her housekeeping business. But the biggest loss by her estimation was the six-month closure of Project Eagle from March to August 2020.

She said she considers it her mission to introduce everyone to Project Eagle, a University of Kansas Medical Center program that serves the needs of young children and lower-income families in Wyandotte County. Her one-woman awareness campaign has helped around 40 families connect with the services offered in the facility on Minnesota Avenue in Kansas City, Kansas.

“Veronica has been a great peer support for the other parents,” said Lisa London, director of Project Eagle. “She’s very engaged with other parents and provides them with resources when she hears they have a need. She’s definitely a connector.”

Project Eagle is part of the Institute of Community Engagement at KU Medical Center and has four different, family-centered programs that help parents with child care, home visits and connections to community resources. They include:

These programs are open to pregnant women, young children from birth to age 5 and their families who reside in Wyandotte County and meet certain income guidelines. Funding comes from multiple sources, including federal and state grants and private donations. It also offers an avenue for research regarding early childhood development.

About Veronica, the mother

Fernandez grew up in Mexico, and neither she nor her husband have extended family in the Kansas City area. Her two oldest children are from a previous marriage, and her five youngest range in age from 4 to 19. Family finances were always tight, and the pandemic made things worse, Fernandez said. Her children needed extra care (more on that later), including doctor’s visits and therapy appointments.

“I have no mom here, no sisters, no family members that can support me through these tough situations,” she said. “So, Project Eagle and KU have provided that support for me and my family.”

Fernandez’s youngest child, Max, 4, is currently enrolled in Educare Kansas City, an early childhood education center that serves families that would have a difficult, if not impossible, time paying for care anywhere else.

Educare KC recently won a technology grant for iPads and smart boards for classroom use. Juniper Gardens Children’s Project, part of the KU Lifespan Institute Centers, with offices in the same building as Project Eagle, will be conducting research to see how these tech tools affect children’s readiness for kindergarten. London said this type of interventional research is especially important for children in low-income families who may not have computers at home.

“The population we serve doesn’t have a lot of access to technology devices,” London said. “We know that children get iPads in kindergarten, so we’re preparing them to walk into kindergarten without that knowledge deficit.”

Fernandez was pregnant with Faith, now 11, when ABC Home Visiting staff began checking on the needs of both Veronica and her family. The staff also offered advice on mother-baby interaction and connections to resources.

“I was happy for the services, because even with seven children, you always learn something new,” Fernandez said.

But it is Valeria, 8, who has benefited the most from Project Eagle, Fernandez said. Her daughter was 2 when a screening arranged through Project Eagle led to a diagnosis of autism spectrum disorder.  “They say, ‘As soon as you know, the better it will be so you can start getting services,’ so I was lucky to be here (in Project Eagle),” Fernandez said. “What if I had been in another place where they don’t give those assessments?”

Today, Valeria is in first grade and, according to her mother, is on track when compared with other first graders in her class. “Her teacher told me how good it is that I took her to all those therapies.”

Since the pandemic shutdown, Fernandez has closed her housekeeping business. She said she plans on helping out at Project Eagle long after her “baby” Max has aged out of the day care program.

For right now, Fernandez is giving back to Project Eagle by heading the program’s Policy Council. She was president of the council in 2014 and accepted the leadership role again this year. The group is responsible for developing, reviewing, approving or disapproving funding applications, program planning, policies and procedures and other important decisions, London said.

More recently, Fernandez addressed the Project Eagle staff at its October 2022 meeting. She had asked London for the opportunity to talk and share her appreciation for the work they do.

“They’re heroes. Sometimes, they feel that they are just watching these little ones, with their hands full during the day, but no —they are heroes because I couldn’t do what I do each day if I was worrying about my children’s care,” Fernandez said. “They are really making a difference in my family’s life, and I want them to know that.”