KU Medical Center was one of the sites of a phase 3 trial that led to the approval of the drug, known by its brand name, Trikafta, by the U.S. Food and Drug Administration on October 21. 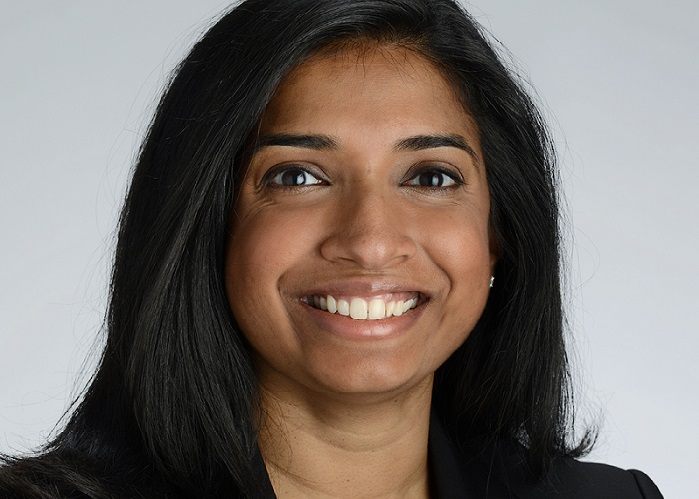 In the summer of 2018, Sarah Carollo, a special education teacher in Grain Valley, Missouri, was on the brink of quitting her job. The 28-year-old, who had been expected not to live past the age of 10, had spent her lifetime battling cystic fibrosis, a lethal genetic disease that causes thick mucus to build up in the lungs, digestive tract and other parts of the body. But by last summer, Carollo's health had declined to the point where she was spending hours every day coughing, doing various therapies to clear her lungs, and administering antibiotics via a nebulizer and intravenously at home to fight chronic lung infections.

"Once, I had to hook up to an IV at school, in the teacher's lounge," she said. "I was getting too sick to teach."

Then while on vacation in Colorado, she received a phone call from Deepika Polineni, M.D., MPH, assistant professor of internal medicine in the Division of Pulmonary, Critical Care and Sleep Medicine at the University of Kansas Medical Center, and a pulmonologist at the cystic fibrosis clinic for The University of Kansas Health System, where Carollo received treatment. Polineni was the site principal investigator from KU Medical Center on a multi-center clinical trial for a new drug, produced by Vertex Pharmaceuticals, to treat the disease.

Carollo had already participated in two clinical trials, neither of which led to improvement in her disease, but she said yes. She started the trial in July 2018. Because it was a double-blind study, Carollo had no idea whether she was receiving the new drug or was in the control group receiving a placebo. After just a few days, she began to suspect she was on the drug.

"The first day of the study, walking in, I had to take several breaks [because of shortness of breath] and sit down just to get to the room," she said. "At the next visit, seven days later, my mother asked me to slow down because I was walking too fast."

After a few weeks, as her health continued to improve, Carollo became able to do more and more, including keeping up with the 3- to 5-year-old kids she teaches. Her plans to retire early are history.

The clinical trial that Carollo participated in at the KU Medical Center was one of two phase 3 trials that led to the approval of the drug, known by its brand name, Trikafta, by the U.S. Food and Drug Administration on October 21. The results of that clinical trial were published today in the New England Journal of Medicine. Polineni is a co-author on the study.

In the United States, 30,000 people have cystic fibrosis, and there are more than 70,000 people with the disease worldwide. Approximately 1,000 new cases are diagnosed every year.

Trikafta, a pill meant to be taken twice a day, is actually a combination of three drugs (elexacaftor, ivacaftor, and tezacaftor) designed for people who have the most common cystic fibrosis genetic mutation. Approximately 90 percent of all cystic fibrosis patients have this mutation. The new drug, the first "triple-combination therapy" to treat the disease, was fast-tracked by the FDA through four of its programs that advance treatments for serious illnesses with unmet patient needs. It is currently approved for people age 12 and over.

"This is really a breakthrough," said Polineni. "This is what many people are calling a game-changer in the disease."

Steven Stites, M.D., who directs the cystic fibrosis clinic and founded its program for adult patients in 1994, concurs. "Last week, I had the single best week in clinic of my life because we saw the first three patients who were started on the new therapy, and the changes in their lives is just beyond remarkable," said Stites, who also is the chief medical officer at The University of Kansas Health System.

Watch a video related to this story

A triumph of precision medicine

Thirty years ago, when the gene responsible for cystic fibrosis was discovered, people with the disease were not expected to live past the age of 20. Thanks to improvements in treatment since then, including inhaled mucolytics and inhaled antibiotics, the median life expectancy today is 37 years, according to the U.S. National Institutes of Health.

Trikafta is the latest in a series of new treatments that have addressed the root cause of cystic fibrosis: mutations in the cystic fibrosis transmembrane conductance regulator (CFTR) gene. A person must inherit a mutated, or damaged, copy of the CFTR gene from both parents to have the disease.

All genes in the body produce proteins that perform millions of tiny tasks that make the human body function. The job of the protein produced by the CFTR gene is to regulate the flow of salt and water in and out of cells in different parts of the body, including the lungs and digestive system. When the CFTR gene is damaged, the CFTR protein either cannot function properly or isn't produced at all.

"Damage to the CFTR gene can affect virtually all organ systems in the body where the cells would normally be expressing the protein," said Polineni. "And it leads to the thick build-up of mucus that becomes stuck, frequently infected and can lead to long-term lung damage."

Nearly 90 percent of people with cystic fibrosis have at least one copy of the most common mutation, known as F508del, which removes a single amino acid from the protein. Without that amino acid, the protein cannot fold into the three-dimensional shape required to be able to transport salt and fluids through cells.

New treatments known as "modulators" help restore the shape and function of the CFTR protein. The first modulator, ivacaftor, was approved in 2012. It addresses a mutation, other than F508del, that accounts for less than 10 percent of cystic fibrosis patients. The next two drugs to be approved, both of which were combinations of two modulators, targeted people with cystic fibrosis who have two copies of the F508del mutation.

These drugs were promising breakthroughs of their own, but they could not treat the disease of people who have just one CFTR gene with the F508del mutation, which would account for 90 percent of patients. That was the goal of Trikafta, a combination of three modulators--elexacaftor, ivacaftor, and tezacaftor.

As part of the Cystic Fibrosis Therapeutics Development Network, which is the world's largest network of clinical trials for this disease, the cystic fibrosis care center at KU was selected as one of the 115 sites around the world to participate in the clinical trial that looked at the benefit of this triple-combination therapy for people who had just one copy of the F508del mutation. Specifically, the trial looked at the benefit of the drug for people who had one copy of the F508del mutation and another kind of mutation that results in no CFTR protein at all or one that doesn't respond to already existing modulating drugs.

The trial lasted 24 weeks. The primary indicator for the effectiveness of the drug was a change in measurement called predicted forced expiratory volume, or FEV1. An established marker of cystic fibrosis disease progression, it measures the volume of air that a person can exhale in one second. At the 24-week mark, the drug had increased the FEV1 in people taking the drug by 14 percent. An increase of just 4 percent would have been considered effective, Polineni said. The drug also resulted in decreases in sweat chloride, a hallmark of the disease, and reduced episodes of worsening respiratory symptoms.

Stites says that the progress made with the disease in recent years is changing the way he talks to patients. "I say, "Listen, you'd better start saving for retirement, and you're going to have to start eating healthy, because you're going to live long enough to have to think about heart disease and diabetes and all the things the rest of us have to worry about.'"

But the fight is not over. Both Polineni and Stites emphasized that they and the rest of the research community remain determined to find a treatment for the 10 percent of patients not eligible for this medication. Meanwhile, Polineni is a global co-principal investigator on a new study looking to see if the drug is more effective than existing modulators for people who have a second CFTR mutation responsive to another modulator, such as ivacaftor (alone).

Moreover, the drug is expensive. Right now, the drug is priced at roughly $311,000 a year. But as Stites notes, it is not much more expensive than other modulators. And the drug can reduce hospitalizations and the costs that they incur. Stites says that the first three patients in his care who sought authorization from their insurance companies to cover the drug have received approval.

"A lot will depend on an individual's insurance plan, but I would encourage people with this disease to work with their care team," said Polineni. "Here at KU, we are here to help support people with CF and help them navigate that process."

After participating in two clinical trials that did not help her, Carollo never dreamed that this trial, and this drug, would help her so much. "I believe research is so important," she said. "And it's our chance to have control over an uncontrollable disease."

In October of this year, along with another person who completed the trial, Carollo participated in a 5K in downtown Kansas City. "We were very emotional at the end, because we had actually completed the 5K," she said. "That's something I'd never done before."