A symposium, held virtually Oct. 27-28, allowed scientists to learn about, and share, the latest research in PKD. 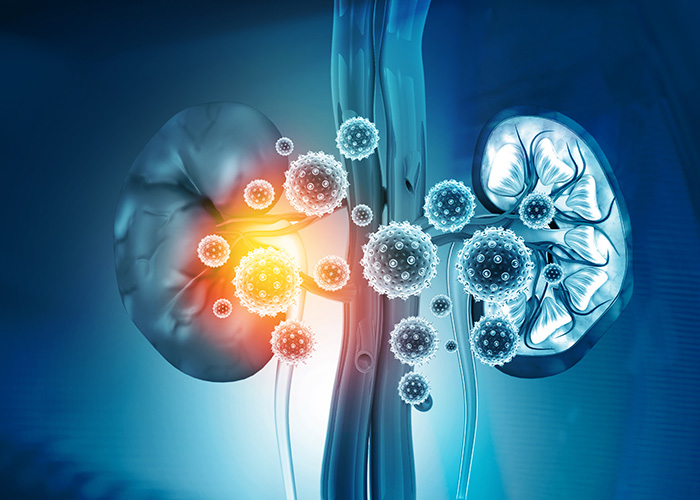 Polycystic kidney disease is a genetic disease that causes uncontrolled growth of fluid-filled cysts in the kidneys, reducing their function and eventually leading to kidney failure.

More than 200 medical scientists from around the world logged onto their computers and tablets last month to present research and talk with other scientists who study an inherited, progressive disease that leads to kidney failure. Nearly 20 were from the University of Kansas Medical Center.

The symposium, held virtually Oct. 27-28, allowed scientists to learn about, and share, the latest research in polycystic kidney disease (PKD). The event was organized by the new Polycystic Kidney Disease Research Resource Consortium (PKD RRC), which was established in the fall of 2020 by the National Institute of Diabetes and Digestive and Kidney Diseases (NIDDK) to advance research in PKD. The consortium consists of Research and Translation Core Centers at three institutions:  KU Medical Center, the University of Maryland-Baltimore and the University of Alabama-Birmingham. The University of Maryland-Baltimore and Yale University School of Medicine together serve as the coordinating site for the PKD RRC.

The NIDDK, part of the National Institutes of Health, funded the consortium through U54 grants, which are designed to support a multidisciplinary attack on a specific disease or biomedical problem. KU Medical Center will receive more than $4 million over five years.

“The purpose of the consortium is to help researchers by providing resources and education that will accelerate discovery in PKD research,” said James Calvet, Ph.D., distinguished professor of biochemistry and molecular biology and member of the Jared Grantham Kidney Institute at KU Medical Center. “It’s designed to help PKD researchers within the consortium, but also nationwide and even worldwide. Anyone who's interested in PKD research can come to us.”

Polycystic kidney disease is a genetic disease that causes uncontrolled growth of fluid-filled cysts in the kidneys, reducing their function and eventually leading to kidney failure. The fourth leading cause of kidney failure, PKD affects approximately 600,000 people in the United States and millions more around the world, according to the PKD Foundation. PKD can also cause cysts in the liver as well as pain in the back and abdomen, kidney infections, high blood pressure and cardiovascular complications. The disease varies widely in severity; more than half of patients with PKD will develop kidney failure by age 60 and need dialysis or kidney transplantation.

The PKD consortium is expected to promote sharing of ideas and resources across institutions, as well as educate other scientists about the disease. The symposium, which is expected to be held annually, is just one way to do those things. “This conference brought PKD researchers from around the world to discuss progress in the field and what research resources are needed to move the field forward,” said Terry Watnick, M.D., professor of medicine at the University of Maryland-Baltimore.

The PKD RRC offers pilot and feasibility grants, as well as smaller vouchers, to researchers with a competitive idea to study PKD. These researchers will be able to access reagents—e.g., human cell lines, human tissue, blood and urine samples, engineered mouse models of PKD—from each of the three centers in the consortium to conduct their research. In addition, the PKD RRC is establishing a PKD patient cohort to facilitate human studies. At KU Medical Center, these services are being developed by three biomedical research cores, headed by Darren Wallace, Ph.D. (Biomarkers, Biomaterials and Cellular Models); Pamela Tran, Ph.D., and Stephen Parnell, Ph.D. (Rodent Models); and Alan Yu, M.B., B.Chir., and Reem Mustafa, M.D., Ph.D., MPH (Clinical Research).

Plans are also in the works to provide research opportunities for students at all levels: doctoral students, medical students and even undergraduates.

A quest to slow progression of the disease

KU Medical Center has a long, rich history in PKD research, beginning with Jared Grantham, M.D., former director of the kidney institute bearing his name, who began studying the disease in the 1970s. He conducted seminal research into how fluid is secreted into cysts in autosomal dominant PKD (ADPKD), the most common form the disease. He and his colleagues at KU Medical Center identified a compound that drives this cyst-filling fluid secretion and the cell proliferation associated with growing cysts. In 2012, he co-authored a paper in the New England Journal of Medicine based on an international study showing that the drug tolvaptan can slow the growth of cysts and disease progression. (The idea that tolvaptan could be therapeutic came from the late Vincent Gattone, Ph.D., then also a member of the Kidney Institute.)

In 2018, tolvaptan became the first FDA-approved drug to treat ADPKD.  It was a breakthrough treatment, but it's not a cure, and it’s approved only for adults. Moreover, the drug comes with some uncomfortable side effects, including thirst and frequent urination. More research is needed to understand the biology of the disease and how it develops, especially to identify biomarkers that can be targeted in new treatments including those designed to slow PKD progression in children.

“The field is at the stage where we’re trying to understand the initiating events of PKD, the cellular pathological events and the progression of the disease,” said Calvet. “If we knew more about those things—environmental factors and the genetic background—we might be able to intervene, slow down the rate of progression, so that many patients never even reach kidney failure.”