May Maloba, a doctoral student at the University of Kansas School of Nursing, brings her expertise in women’s health to Kenya, Cambodia and the United States. 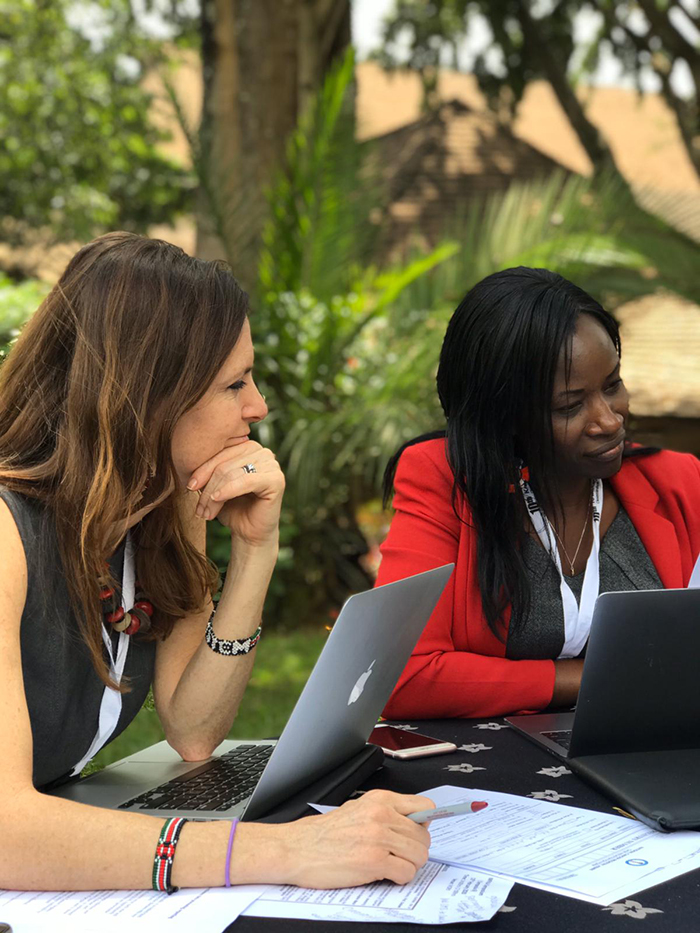 May Maloba, graduate student, KU School of Nursing, connects with Sarah Kessler, Ph.D., MPH, associate professor, KU School of Medicine, during a visit to Kenya. The two have worked together on research projects for eight years.

Few nursing students can say they’ve affected the lives of patients on three continents, but May Maloba, a Ph.D. student at the University of Kansas School of Nursing, can truthfully make that claim.

In Africa, Maloba advocated for women’s health issues in her native Nairobi, Kenya. in Asia, she trained medical professionals in Cambodia to increase preventive screenings. And in North America, she coordinated research that improved the chances for infants born to mothers who test positive for HIV.

“May is a force of nature,” said Sarah Kessler, Ph.D., MPH, professor of family medicine and community health at the University of Kansas School of Medicine. She and Maloba have worked as a team for eight years.

“May knows how to motivate people and how to navigate challenges, and she manages to maintain her infectious laughter and optimism through it all,” Kessler said.

“May is a connector and uses a combination of her knowledge, experience, persistence and good nature to navigate our team through many challenges and barriers faced during the implementation of our research studies in Kenya,” Kessler said.

One such project was the establishment of the HIV Infant Tracking System (HITS), a software program developed by Kessler’s former classmate at the Johns Hopkins Bloomberg School of Public Health. Kessler then implemented the software to shorten the window of time between when a baby with an HIV-infected mother is tested for HIV and when the results are available to the parents and health center. With a shorter waiting time, health care professionals can begin treating the infant weeks, or even months, earlier.

During the pandemic, a version of the HITS system was used in Kansas and in Kenya to help COVID-19 patients gain access to needed services.

Maloba has also hosted KU students and faculty coming to work or observe in Kenya, including a leadership team that included KU Chancellor Douglas A. Girod, M.D. It was Girod who suggested that Maloba pursue her doctorate at KU, Maloba said.

Since then, she’s enjoyed completing classes in KU School of Nursing’s Doctor of Philosophy program online from her home in Nairobi with one-week summer visits to Kansas. Her last visit was in June 2022. The program’s flexibility allows her to keep working in Kenya, and the on-campus visits allow her to visit faculty mentors on campus in Kansas City, including Kessler.

Maloba was motivated to pursue a graduate degree because of the opportunities afforded to the position. “The title of Dr. Maloba will lend additional credibility to May’s vast experience and will open additional doors,” Kessler said.

Maloba is already working with Kessler to apply for grants from the National Institutes of Health specifically for recent Ph.D. graduates.

Her work in Kenya

In a resource-limited country such as Kenya, few health professionals were advocating for the services needed to improve and protect the health of women and children. Maloba stepped into that void. Maloba’s counseling, screening and treatment sessions with women were emotional: “They will start talking about their challenges. I get very passionate about helping because of the exposure I received.”

One of her early campaigns was to increase the number of Kenyan women receiving cervical cancer screenings and necessary treatment. In early 2008, cervical cancer screenings and treatment services were only provided by gynecologists and other types of doctors and in private hospitals. This made reproductive health services inaccessible and costly, and the few doctors who provided the services were already overwhelmed, Maloba said.

According to figures from the Kenya National Cervical Cancer Prevention Program Strategy 2012-2015, only 3.2% of women in Kenya age 18-69 years had been screened, Maloba said. The main barriers to cervical cancer screening and treatment were staffing shortages and insufficient staff training. But Maloba was not dissuaded. She worked to incentivize other health care providers to offer screenings.

“My approach was to work with them with a target of screening only two women a day. I was excited because the more they screened, the more they realized the benefit of screening, and at the end of the month, we moved from zero to 40 screens in a month,” she said.

Health care workers could stand out in performance reviews because of the increased screening numbers, Maloba said, and thereby become champions of cervical cancer screening. “Harriet Adhiambo and Sabina Hamisi, who worked in rural health facilities, became my first champions, and currently they are specializing in women’s health and pursuing a master’s degree and Ph.D., respectively,” Maloba shared. “Also, international students from UCSF (University of California-San Francisco) began their specialized careers after working with us.”

Maloba rose to the level of a national educator, helping Kenyan health professionals learn how to increase screening numbers throughout the country.

Based on her success in increasing cervical cancer screenings in Kenya, Maloba was invited to Cambodia to train other medical professionals. What she found in Cambodia was a cultural bias against the whole process.

“If you're screened and you're positive, they will call you promiscuous, according to their culture. That hindered screening,” Maloba said, noting that there also wasn’t support or funding for screening from the government.

She drew from her own background. “I told them that 10 years back, I was like you. I just showed them what we were able to achieve during that time.”

She also worked with Cambodian leadership to rewrite screening protocols and involve nurses in the cervical screening process. Previously, the only ones allowed to screen for cervical cancer in Cambodia were specialized gynecologists.

After her class, the Cambodian trainers responded to her message. “They were so excited. We actually saw around 300 women screened and treated at the same time,” Maloba said. “They actually saw that this is something they can do.”

Maloba’s latest project — and the focus of her dissertation — concerns the human papillomavirus (HPV) vaccine, which has been shown to dramatically reduce the number of women who develop cervical cancer. Maloba’s goal is to get 90% of all eligible girls in Kenya to get the vaccine, starting small and setting goals as she did with the cervical cancer screenings.

Once again, she is confident she can succeed. “By knowing the challenges, barriers and facilitators, we will be able to design a good program that will help us achieve the goal.”