Learn about the new athletic training program at the University of Kansas Medical Center. Classes in the Master of Science in Athletic Training (MSAT) begin in the summer of 2021. 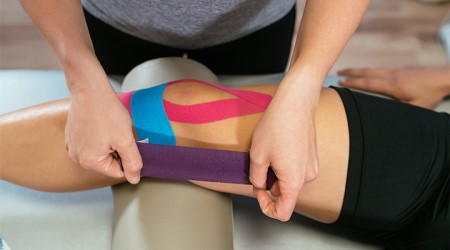 The goal of athletic training – to help others safely achieve higher levels of performance – is often associated with professional sports. But athletic trainers are employed in a wide variety of places, and that professional start now begins at the University of Kansas Medical Center.

The athletic training program has a new home at the University of Kansas Medical Center. The Master of Science in Athletic Training (MSAT) is currently accepting applications, and classes will begin in the summer of 2021.

Founding Program Director LesLee Taylor, Ph.D., said athletic training will benefit from a synergy with similar but long-established programs such as physical therapy, occupational therapy and dietetics and nutrition.

Like those existing programs, the MSAT program will be a part of the School of Health Professions.

Q: Why is the athletic training program now a master's degree?

A: After 2-1/2 years of study, the Athletic Training Strategic Alliance in 2015 decided to transition their professional degree from bachelor's degree-level to the master's degree instead.

"The profession made a decision that for what we're requiring for educational content, and, in comparison to other health care providers like physical therapy, occupational therapy. physician assistant, and nurse practitioner, that a master's degree made more sense," Taylor said.

Colleges and universities with bachelor's degrees in athletic training could choose to close their programs or transition to master's level. The University of Kansas leadership decided to close its undergraduate department in Lawrence and begin the master's degree program on the medical center campus. The last class to receive a bachelor's degree in athletic training graduated in May 2020.

Q: Why is the athletic training program now at KU Medical Center?

A: Taylor said she sees "a ton of opportunity" in the move to Kansas City. "Being housed in the School of Health Professions offers a chance for collaboration and student engagement with other disciplines, and the access to the medical community in the Kansas City metropolitan area is exceptional."

Dawn Emerson, assistant professor for Health, Sport and Exercise Science at the University of Kansas in Lawrence, taught classes previously included in the bachelor's degree in athletic training. She expects the career of athletic training to get a boost in prestige in its new home at KU Medical Center.

"Personally, I hope that this improves the self-image we have as athletic trainers to think of ourselves as health care professionals," Emerson said. "Students will be able to take courses with other health professions students, which they have not been able to do in the past."

Q: Do you have to be an athlete to become an athletic trainer?

A: Many students attracted to the field are athletes, but they don't have to be. However, it does help if students enjoy sports, Taylor said. The goal of athletic training -- to help others safely achieve higher levels of performance -- is often associated with professional sports. But athletic trainers are employed in a wide variety of places, too.

"Athletic trainers also work with the military and industry. They work with public safety and performing arts. I have alumni from my previous institution who've worked with Cirque du Soleil and the Radio City Rockettes, and they're working in physician-practice offices side-by-side with other health care providers," Taylor said.

If you are an athlete, the program's move to the master's level education might be helpful, Emerson said. "It opens up opportunities for individuals interested in going into athletic training later in their careers," she said, or for athletes who found the bachelor's-level coursework too rigorous while still competing in their college-level sport.

Q: What does the Masters of Science in Athletic Training entail?

A: The Master of Science in Athletic Training will take two years and 68 credit hours to complete. Year one will be filled with classroom learning and some clinical experiences, Taylor said. In the first semester of year two, students will increase their time in clinics, and by their last semester, they'll be off campus in a practicum, practicing what they've learned.

Three full-time professors will be hired for the new department, and some classes will be co-listed as both athletic training and physical therapy, with educators from physical therapy leading those classes.

To apply, potential students must meet minimum admissions requirements. Students must have a completed bachelor's degree. The degree can be in any major if prerequisite courses are included (or added after graduation).

"The major of exercise science or kinesiology does line up most closely with the prerequisites, but I've had students who were business majors and art majors. If they meet the prerequisites and the grade-point average, they would certainly be considered," Taylor said.

Q: Will there be opportunities for hands-on learning?

A: Absolutely, said Taylor. She said she's reaching out to professional sports teams in the area and KU Athletics to build partnerships. While those may be obvious choices, they aren't the only choices.

"We've had conversations with some of the other colleges and universities in the area, about taking our students for immersive experiences," she said. If geography isn't a boundary, Taylor said she can connect with former students and colleagues for practicum placement. "Students can really go anywhere they want."

Q: Where should I go for more information?

Taylor grew up in a small town in central Kansas called Chapman, and she received her bachelor's degree from the University of Kansas in Lawrence.

She brings 20 years of experience as program director for the Master of Athletic Training Program at the Texas Tech University Health Sciences Center (TTUHSC) in Lubbock, Texas. She said she came to KU Medical Center for the challenge and excitement of starting a program from scratch, just as she did at TTUHSC.

In the coming months, Taylor will begin the process of achieving accreditation from the Commission on Accreditation of Athletic Training Education (CAATE), a national organization where Taylor was president from 2017 to 2019.

She said the work is a chance to help her home state and her alma mater. "I see a whole lot of potential," Taylor said, "and ultimately an opportunity to give back to an organization and institution that gave me my start."