Women in academic medicine remain less likely to be promoted, according to KU Medical Center study in NEJM

Female physicians are more likely to pursue careers in academic medicine than their male counterparts but are less likely to be promoted to senior faculty and leadership positions, and that gender gap is no narrower than it was 20 years ago, according to a study published by researchers at KU Medical Center in the NEJM. 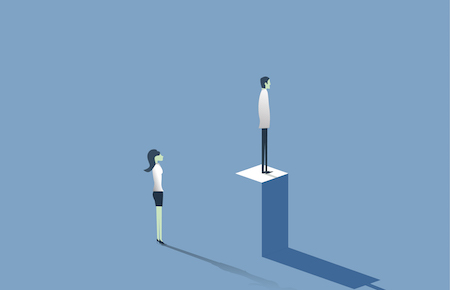 Female physicians are more likely to pursue careers in academic medicine than their male counterparts but are less likely to be promoted to senior faculty and leadership positions, and that gender gap is no narrower than it was 20 years ago, according to a study published by researchers at the University of Kansas Medical Center in the Nov. 26 issue of the New England Journal of Medicine (NEJM).

The study, Women Physicians and Promotion in Academic Medicine, is an expansion of, and update to, a landmark study published in the NEJM in 2000 by a researcher at the Association of American Medical Colleges (AAMC). The earlier study demonstrated that female graduates of U.S. medical schools working at academic medical centers in the United States were advancing from assistant to associate professor, and from associate to full professor, at lower-than-expected rates.

The new study shows that gender differences have not diminished since the 2000 study was done – the same era during which women have closed the medical school admissions gender gap.

"We compared rates of promotion across medical school graduates included in the first study with more recent graduates and found that promotion rates for women have not improved," said Kimber Richter, Ph.D., MPH, professor of population health at KU Medical Center and lead author of the study. "So things have not gotten better. In fact, for promotion to full professor, they're clearly worse."

Richter decided to do the study when she held the Joy McCann Professorship for Women in Medicine, part of the KU School of Medicine's Women in Medicine and Science Program, from 2016 to 2019.

"I was looking for a project to have some impact on women's advancement in medicine and science," said Richter. "I was also getting to know the literature and research on gender differences in promotion, funding and salaries. And I came upon this study that had been published 20 years ago and I thought it should be updated."

The new study analyzed data from the years of the original study (1979 to 1997) and from 1998 to 2018. Across all years, Richter and her colleagues found that women were 12% more likely than men to choose a career in academic medicine. But after they were hired, academic medical centers promoted those female junior faculty at consistently lower rates than men in the same positions.

Over the three decades, on the whole, women assistant professors were:

These findings were true not only across levels of promotion, but also within departments for basic science and clinical departments alike. "The data are incredibly, depressingly consistent," said Richter. "You'd think that maybe half the time more women than expected would be promoted, but almost never are as many women promoted as you'd expect. It's consistent across all levels of promotion and all graduating medical school cohorts."

Not a pipeline issue

Study data came from the AAMC and included 559,098 students who graduated in academic years 1978-79 through 2012-13 from 134 schools that grant M.D. degrees in the United States. Data on faculty promotions extended through 2018 and came from AAMC's Faculty Roster, which comprises information on full-time faculty and department chair appointments.

The researchers conducted two types of analyses. For the cohort analysis, they examined promotions for women graduating in each medical school class (cohort) since 1979 to see if women were promoted at expected rates. The expected promotion rate for a given cohort was determined by the proportion of women in the preceding career stage. For example, if women represented 30% of a given year's medical school graduates, then 30% of all graduates from that class who entered academic medicine as assistant professors would be expected to be women. If, from the same medical school cohort, it turned out that women represented 40% of assistant professors, then 40% of all promotions to associate professor would be expected to be women.

The researchers also conducted adjusted analyses to compare promotion rates among cohorts in the earlier study with later cohorts in the present study. They adjusted the data for race, graduation year and department type to see if gender differences disappeared when these confounding variables were factored out.

They didn't. Promotion disparities persisted despite the fact that women have made up at least 40% of the incoming medical students every year since 1992, and surpassed men for the first time in 2017. These disparities also contradict the notion that the scarcity of women physicians in senior academic positions would improve when there were more women doctors, pointed out Grace Shih, M.D., director of OB anesthesia at KU Medical Center and a co-author on the study.

"Everyone always says it's a pipeline issue," said Shih. "But 20 years later, there are more students graduating from medical school who are female. And even if you look at departments that are predominantly female-oriented such as pediatrics or OB/GYN, the leadership is still predominantly male."

The findings also challenge the perception that women are gaining some ground in academic medicine. Women constituted 21% of full professors in 2014, according to AAMC data, an increase over the 10% of full professors they accounted for in 1979, according to the original NEJM study. But as the KU study notes, larger numbers of women entering academic medicine could account for this increase. What most studies fail to evaluate is whether women are promoted at the same pace as men.

Gender equity is key to excellence in academic medicine, according to the AAMC. "Women academic leaders bring unique perspectives, skills and talents to each part of the academic missions of research, education and practice," said Robert D. Simari, M.D., executive vice chancellor of the KU Medical Center and a co-author on the study. "Current methods to support women in academic medicine are insufficient. We must find new and more effective ways to do so. Moreover, the stalled progress of diversity and inclusion efforts for women may imply an even longer delay in the areas of race and ethnicity."

The study cites numerous potential reasons that women do not get promoted at the same rates as men. They include:

Moreover, some of the factors critical for advancement in academic medicine come with an inherent bias, such as the need to publish research in medical and science journals, Richter noted. Women are underrepresented among editors and editorial boards.

"That can create publication gaps, due not only to how research is reviewed but also the kinds of research that are viewed as important," she said. "Service on editorial boards is a big factor in promotion, so if women are not getting those positions, they have less ammo for the promotion and tenure process." Lack of advancement of women in medical and professional societies can also factor into the promotion process.

Shih, who became the McCann professor at KU in 2019, said that she believes that much of the bias is likely neither deliberate nor conscious, which is why the solution must be both.

"We need to intentionally pay attention. [We need to] tap women who are going to be good candidates for leadership positions and start giving them the opportunities and the skill sets to become good leaders, such as through leadership courses. And then we must have a position available for them to go into, so that they don't leave the institution," she said.

"It's disheartening that after 20 years, we're still in same position. We can get there, but it has to be very intentional."

"The data are incredibly, depressingly consistent. You'd think that maybe half the time more women than expected would be promoted, but almost never are as many women promoted as you'd expect."
- Kimber Richter, Ph.D.

Funding for this study was provided by the University of Kansas Medical Center Joy McCann Professorship for Women in Medicine, and an international fellowship from the American Association of University Women (AAUW).