Individuals who have an inherited condition that gives them high cholesterol regardless of diet or other lifestyle issues might one day benefit from the new drug APO(a)-I, which was tested at the University of Kansas Medical Center by Patrick M. Moriarty, M.D. Results were published in the New England Journal of Medicine in January 2020. 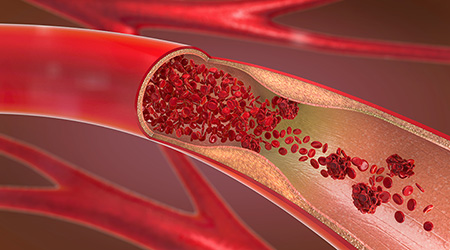 Individuals who have an inherited condition that gives them high cholesterol regardless of diet or other lifestyle issues might one day benefit from a new drug recently tested at the University of Kansas Medical Center.

Patrick M. Moriarty, M.D., director of clinical pharmacology and the Atherosclerosis/ Lipid-apheresis Center, is a professor of internal medicine for the University of Kansas School of Medicine. He has co-authored a multisite clinical trial study published in The New England Journal of Medicine.

The article, which ran in the Jan. 1, 2020, issue, shares the results of a drug trial. This particular drug targets the creation of a protein that carries cholesterol.

If eventually approved by the Food and Drug Administration, the drug could help lower a specific type of cholesterol found in the blood, which in turn lowers the risk for life-threatening conditions.

About the drug's target

The new drug, referred to as APO(a)-I, affects a particular lipoprotein within the body called lipoprotein(a), also known as Lp(a).

In general, lipoproteins are a combination of fats (lipids) and proteins that carry cholesterol throughout the bloodstream. They're "good guys" when delivering cholesterol where it's supposed to go, since cholesterol is needed for the creation of the body's new cells.

But lipoproteins can also be bad guys. They drop cholesterol in places where it can cause problems, such as fatty buildups (atherosclerosis) and narrow arteries that can lead to strokes or heart attacks.

The good guys are compact and heavy, and they're measured as high-density lipoprotein, or HDL. This good cholesterol earns its praises because its lipoproteins are a clean-up crew. They remove cholesterol from the bloodstream by taking it to the liver to be disassembled and discarded.

The bad guys (which contain apoB cholesterol such as low-density lipoprotein or LDL) are like movers who are too lazy to take your boxes upstairs. They tote waxy cholesterol around and then just drop it wherever.

Lp(a) is a close cousin to LDL, since it causes similar problems. But unlike LDL, this particular lipoprotein can't be managed by lifestyle changes, such as quitting smoking or starting and maintaining an exercise program. Since Lp(a) contains LDL, it can cause atherosclerosis but also it can increase blood clots and inflammation.

High Lp(a) is due to genetics, Moriarty explained. If cardiovascular issues run in your family, one reason could be due to an elevated Lp(a) irrespective of LDL levels.

Drugs commonly used to treat high cholesterol - statins under the brand names of Lipitor, Pravachol and Crestor, for example - don't lower Lp(a). In fact, statins can actually raise Lp(a) and compound the problem.

Up until now, no medication treated Lp(a). "Most physicians don't even measure it," Moriarty said. "Some reason, ‘Why should I measure it when I can't treat it?'"

About the clinical trial

The clinical trial was Phase 2 of the FDA process for drug approval. In a Phase 2 trial, researchers test a small population to make sure the drug works and that it's safe.

For the trial, 286 specially selected participants were given injections. They received either a placebo of saline solution or the APO(a)-I in varying amounts.

To qualify for the clinical trial, participants needed to have a history of cardiovascular problems. They also needed high levels of Lp(a).

Participants who received 20 milligrams of the APO(a)-I drug once a month for six months had 35 percent reduction in lipoprotein(a). Those who took that same dose every week had an 80 percent reduction.

How the drug works

APO(a)-I belongs to a class of drugs called antisense oligonucleotides. These drugs work because they interrupt the messenger RNA within cells. Without a successful signal, specific proteins can't be formed.

About 20 percent of the world's population has high lipoprotein(a) levels, Moriarty said. "If you look at it globally, that's more than a billion people who have this marker, placing them at risk for cardiovascular events," he said.

Africans and African-Americans can have lipoprotein(a) levels two to three times higher than individuals of European or Asian descent, placing them at higher risk for cardiovascular problems.

Phase 3 of the drug trial will include 10,000 participants at hundreds of clinical sites across the globe, Moriarty said. The drug will be tested at a dosage of 80 milligrams once a month.

The University of Kansas Medical Center will be one of those sites, and research will last five years.