Older adults who drink three cups of dairy milk a day can increase their brain’s level of a powerful antioxidant that helps protect the brain from the damage that accompanies aging and aging-related diseases. 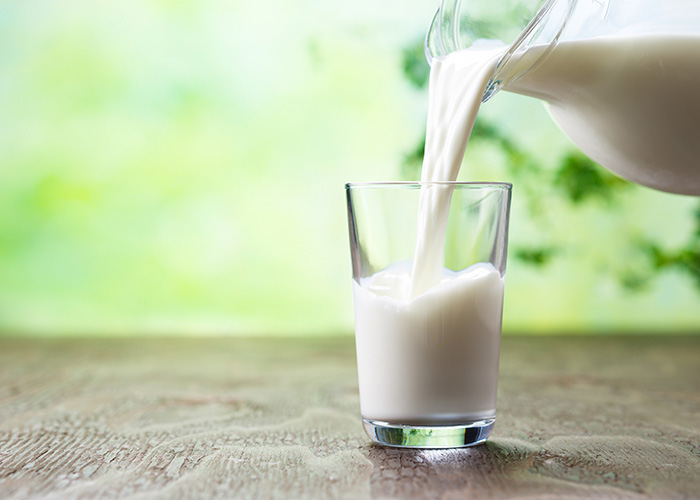 The whey protein in milk has particularly high levels of cysteine, which is especially important for the body to make more of the antioxidant GSH. Milk is also rich in riboflavin and calcium, which are required for GSH maintenance.

Worried about your aging brain? One solution might be on a shelf in the refrigerator aisle of your grocery store, according to new research conducted by scientists at the University of Kansas Medical Center.

The KU Medical Center research team found that older adults who drink three cups of dairy milk a day can increase their brain’s level of glutathione (GSH), a powerful antioxidant that helps protect the brain from some of the damage that accompanies aging and aging-related diseases. (The typical American adult over age 60 drinks less than two cups of milk per day, according to data from the Centers for Disease Control and Prevention.)

Just like an old car that rusts, the human brain becomes corroded over time by free radicals and other oxidants that are released as the brain converts nutrients into energy. This oxidative stress, as it’s called, is believed to be a major mechanism of brain aging as well as many neurodegenerative diseases including Alzheimer’s and Parkinson’s. GSH helps stave off oxidative stress and the damage it causes. But as people age, brain levels of GSH tend to fall.

“It's exciting that something as simple as drinking milk can increase GSH because it’s not a drug, it’s just a simple food,” said Debra Sullivan, Ph.D., RD, professor and chair of the Department of Dietetics and Nutrition in the School of Health Professions at KU Medical Center and an author on the study, which was published August 15 in Frontiers in Nutrition. “And the three cups a day is actually what is recommended by the U.S. Dietary Guidelines.”

The study builds on work that Sullivan began over a decade ago with In-Young Choi, Ph.D., lead author on the study and director of the Metabolic Imaging Unit and the Magnetic Resonance Science Program at the Hoglund Biomedical Imaging Center at KU Medical Center. Choi, who focuses on brain aging and neurodegeneration, had collaborated with Phil Lee, Ph.D., a professor of the Department of Radiology, to develop a novel magnetic resonance imaging technique that can measure the level of antioxidants in the brain. These unique scans use special imaging techniques based on a multiple quantum physics concept and can selectively detect GSH in different parts of the brain simultaneously, Choi said.

Sullivan approached Choi about collaborating and using her brain antioxidant scanning technique to measure how what people eat affects their brain. When they completed their first exploratory study, they were surprised by the results.

“I was thinking fruits and vegetables would be highly correlated with antioxidants in the brain,” remembered Choi. “But instead it was dairy, and among the dairy foods, it was milk. That was really surprising.”

The researchers then applied for and were awarded a grant from the National Dairy Council, which along with a National Institutes of Health (NIH) grant that funds the Hoglund Biomedical Imaging Center, supports their work. These funders have no input on the study design, data, the interpretation of the data or the writing the manuscript, Sullivan said.

In 2015, Choi and Sullivan and their team published an observational study in the American Journal of Clinical Nutrition that again found that milk was highly correlated with concentrations of GSH in the brain of older adults. The next step, the current study, was designed to see what would happen to someone’s brain if that person increased their milk consumption.

In this study, 73 adults aged between the ages of 60 and 89 who typically consumed less than 1.5 servings of dairy per day were randomly assigned into a control group, which did not alter its usual milk intake, and into an intervention group, which increased their milk intake to three cups per day for three months. The study provided the participants in the intervention group with low-fat 1% milk from regional Kansas City area grocery stores weekly.  For both groups, brain antioxidant imaging scans were conducted at baseline and after three months.

While there was no change in the levels of GSH in the brains of the participants in the control group, the group that drank three cups of dairy milk a day saw their brain GSH levels increase by an average of nearly 5% overall and by more than 7% in the parietal region of the brain.

Choi noted that earlier findings have shown that GSH levels are lower in older adults about 10%. “So, by drinking milk, it looks like you can catch up some,” she said.

What remains to be discovered is the specific mechanisms by which milk increases levels of GSH in the brain. The researchers know this much: The GSH molecule is made of three amino acids—glycine, glutamate, and cysteine—and milk is a source of all three. Compared with other foods, the whey protein in milk has particularly high levels of cysteine, which is especially important for the body to make more GSH. Milk is also rich in riboflavin and calcium, which are required for GSH maintenance.

More research is needed to determine which of these factors are behind the increase in brain GSH levels. The researchers also plan to conduct a larger study as well as studies including cognitive tests to measure if milk is leading to measurable changes in brain function. They also want to determine if there is an optimal dose of milk and if the amount of milk fat matters.

In the meantime, Sullivan sees no reason to wait to make sure you’re getting your three cups of milk each day. “It’s important for your brain health, your bone health, your muscle health, all of those things,” she said. “That’s the takeaway.”

"I was thinking fruits and vegetables would be highly correlated with antioxidants in the brain. But instead it was dairy, and among the dairy foods, it was milk. That was really surprising."
- In-Young Choi, Ph.D.,director of the Metabolic Imaging Unit and the Magnetic Resonance Science Program at the Hoglund Biomedical Imaging Center