Chris Melgares, a doctorate of physical therapy (DPT) student from the University of Kansas Medical Center, finished in the top 20 percent of the field of 175 male runners at the U.S. Olympic marathon team trials. 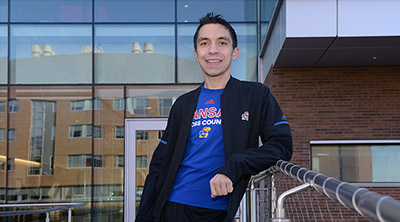 Chris Melgares, a doctorate of physical therapy (DPT) student from the University of Kansas Medical Center. finished in the top 20 percent of all runners at the U.S. Olympic marathon team trials.

Of the 175 male runners, Melgares finished the race 33rd with a time of 2:16.59, just milliseconds from his qualifying time of 2:16.35 at the California International Marathon.

The trials were televised live from Atlanta Feb. 29 on NBC.

However, before the race, he kept optimistic. "I'm not going to limit myself," he said. "I'm going to approach it the way I do every race, which is just try to get the most out of myself. I don't like setting barriers, so my goal is always to stay as relaxed as I can for as long as I can. And then when it starts to hurt, try not to stress out about it and continue to push through the hurt."

He's also about a decade younger than when marathon runners typically reach their career zenith. "So I've got time for improvement," Melgares said.

Melgares qualified for the Olympic trials by nearly three minutes in his first-ever attempt at a marathon, since they don't offer that distance in collegiate races.He wasn't even serious about completing a marathon, he said, until June 2019 - just eight months before the Olympic trials - when his friends suggested it.

"My friends had already done it. So, I knew if I just kind of followed on their coattails, I could do what they've done," he said.

His friends were serious about running, obviously. Two were fellow Jayhawks from his track team at the University of Kansas, where Melgares competed in the 10,000- and 5,000-meter distances while completing his bachelor's and master's degrees in Exercise Science.

Another friend is from Chris's hometown of Manhattan, Kansas. All four friends planned to travel together to Atlanta.

Are friendships out the window once the race starts? Not at all, Melgares said.

"We will we will definitely honor our friendships first," he said. "We're setting up our itinerary for the trip so that we'll be able to spend a lot of time together. And we're all running for the same club team, the Kansas City Smoke."

Melgares said he's drawn to running long distances. "I think long distance fits my personality, the discipline it requires and the requirement to stay composed for long periods of time. It really fits well with how I operate on a day-to-day basis," he said.

His mother, Susan Melgares, is the cross-country coach at Manhattan High School and coached Chris during his pre-KU days. But because his mother was the coach and a runner herself, and his father a runner as well, Chris at first wanted nothing to do with it.

"I did not like running at all when I was little. Not at all," he said.

Instead, he devoted his energy and athleticism to baseball. "I wanted to blaze my own trail. I thoroughly enjoyed playing baseball, and it was a talent for me, too," Melgares said. "I thought, ‘Why should I bother with running when I'm good at baseball, and it's fun for me?' I definitely didn't appreciate the consistent commitment and determination it takes to be good at running."

Chris decided to invest more into running when he joined the high school cross country team, coached by his mother, and was drawn in by the supportive team dynamic. Today, his whole family runs. His sister Cara, a junior at Kansas State University, and his brother Michael, a senior at KU, are both distance runners for their respective track teams.

Chris manages to balance his training schedule with a demanding academic load as he pursues his doctorate degree in physical therapy. It's a challenge he managed well during his undergraduate and graduate years, making the Academic All-Big 12 First Team multiple times. In fact, he was named the Big 12 Cross Country Scholar Athlete of the Year in 2016.

"I think running and school go hand in hand really well, because it gives you that time just to step back and get out of your head, get out of your notes," Melgares said. "That way, when you go back into studying, there's more energy and more zeal for it."

He chose physical therapy as a career path thanks to an aptitude assessment he took in high school, coupled with the advice of a trusted anatomy teacher. "That teacher played a big role in shaping me as a person, and I trusted him, so when he suggested physical therapy, that set my path," Melgares said.

His DPT professors have been encouraging as well. "My professors have all been just so supportive, and I'm incredibly grateful for that. Because I know it's not like that everywhere," he said.

Ultimately, Melgares might be a better physical therapist because of his running. "The discipline it requires, the constant focus and the balance that it requires, are all things that translate to practicing as a PT -- and to just life in general. I think that remembering those lessons are very important."