To stem the spread of COVID-19, ceremonies at the three KU School of Medicine campuses were canceled. Instead, they celebrated one of the most important milestones in their professional lives creatively. 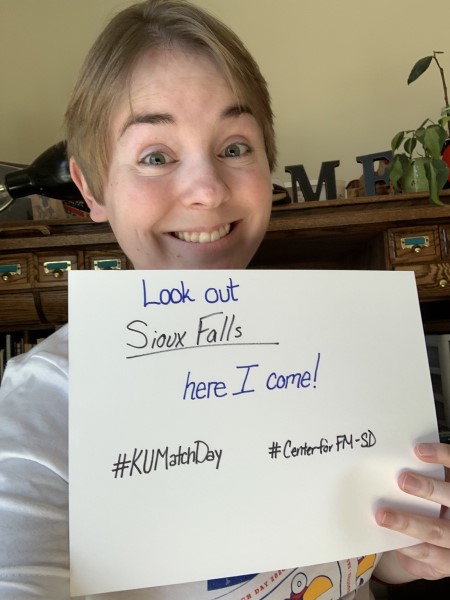 For weeks, KU School of Medicine student Terrance Mabry had looked forward to celebrating Match Day at a joyous ceremony in Battenfeld Auditorium attended by his parents and his fellow fourth-year classmates.

Match Day ceremonies celebrate the news of where medical students across the country "match" for their residencies, which is the next phase of their medical training after graduation. Traditionally, students go onstage and share with each other and invited family and friends where they will spend the next three to seven years training in their chosen specialty.

But on Friday, March 20, the date of this year's Match Day, ceremonies at the three KU School of Medicine campuses — Kansas City, Salina and Wichita — were canceled, as were other Match Day events at countless medical schools around the country, to stem the spread of COVID-19.

The coronavirus might have stolen the Match Day ceremonies, but it did not rob the students of their joy. Instead, they celebrated one of the most important milestones in their professional lives creatively--at home, in small groups, via their smartphones and online.

The students learned where they would complete their residencies from emails sent on Match Day by the National Resident Matching Program, the nonprofit organization that pairs graduating applicants with training programs at teaching hospitals around the country. This year, a total of 197 students matched from the three KU School of Medicine campuses: 121 in Kansas City; 67 in Wichita and 9 in Salina. Nearly one-third of these students will be staying in Kansas to complete their residencies.

Mabry opened his email on Match Day with his fiancée, his roommate and his dog and learned that he had matched in internal medicine at University Hospital in Columbia, Missouri — a moment he shared on the #kumatchday Instagram.

"I am grateful to be closer to home and able to continue my career in medicine," said Mabry, who is from St. Louis. "I posted it online, so my phone was blowing up all day with congratulations."

Mabry said he grew interested in medicine as a kid witnessing his father's ongoing heart problems and seeing how much of an impact doctors could make on patients' lives. In addition to treating patients, he is also interested in working to improve the health care delivery system.

A post shared by Office of Student Affairs KC (@kumatchday)

In her apartment in Salina, fourth-year student Clara Strunk learned that she matched with Sioux Falls Family Medicine Residency when she opened her email with her younger brother and her parents, who drove up from the Wichita area. "It went well as each of them was able to call different family members on speakerphone to share the moment," she said.

The Sioux Falls program is focused on training physicians to practice rural medicine, something Strunk said she has been interested in since she was a senior in high school in Mulvane, Kansas, and saw the announcement for the opening of the new KU School of Medicine-Salina. "I knew at that point that Salina was where I wanted to go to medical school," she said. "I didn't have a plan for after medical school, but I knew that I wanted to be here."

Strunk might be going to South Dakota for residency, but she plans to return to Kansas to practice in a small county hospital like the one in Syracuse, a town less than 20 miles from the Colorado border and where she has family. "You have a real opportunity to make a big impact in smaller communities," she said.

For Jordan Stiverson on the KU School of Medicine-Wichita campus, Match Day was somewhat anticlimactic. He learned in January that he matched with the urology residency program at the KU Medical Center in Kansas City. (Urology is one of a handful of specialties that matches incoming residents early.)

Stiverson spent three years in college at Wichita State studying mechanical engineering before he realized that what he really wanted to study was medicine and changed majors. He said he applied for urology residencies because he likes the field's mix of surgery, clinical work and medical management of patients, as well as the people in urology he has already worked with.

Despite already knowing where he'd matched, Stiverson had still looked forward to Match Day. "I was going to see all the people I've spent the last four years with find out where they were going and then share that on stage," he said.

Instead, Stiverson went to a fellow student's house, where a handful of students and their significant others had brunch before opening their emails. They drew straws to determine in which order they would open the emails, and then each student chose a "walk-out song" to sing while walking up to the balloons that were hung on the wall and announcing where they matched.

"I think we were able to create a really meaningful, memorable Match Day spent with our closest friends and loved ones," he said. "And at the end of the day, we are still going to be docs and we've got our spots."