Solar panels allow Kansas City campus to make an important contribution to the environment through the use of this renewable energy resource. 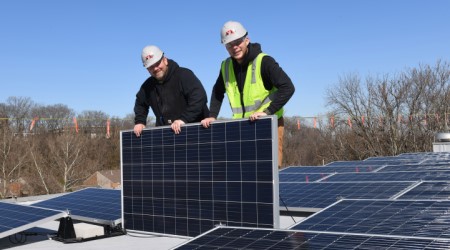 Two workers install solar panels atop the Landon Center for Aging in March 2021. The building on the northwest corner of campus was chosen in part because it could handle the added weight of the panels. Photos by Elissa Monroe, KU Medical Center Photo Services

To tap into more sustainable sources of power, two buildings on the University of Kansas Medical Center's campus in Kansas City were recently crowned with a total of 306 solar panels. The energy they provide could save more than a quarter of a million dollars in the next 30 years if the experts' predictions hold true.

The panels, installed on the Health Education Building in September 2020 and on the Landon Center on Aging in March 2021, are harnessing the power of the sun to offset electricity costs.

Steffani Webb, M.B.A., vice chancellor for administration at KU Medical Center, said the installation and use of solar panels is important to the university. "These panels make an important contribution to the environment and to our societal well-being through use of this renewable energy resource and reduced energy consumption."

For three years, Maria Schryer, assistant director of energy and environmental systems at KU Medical Center, has shepherded the project. "One of the biggest parts of my job is energy management and finding ways to reduce our energy use on campus," she said. "Of course, renewable energy is a big part of that.

How did this solar project come about?

Schryer: About three years ago, the idea was pitched to us from an outside company. It was always something that we in Facilities Management had in the back of our minds but hadn't yet pursued because at that point it wasn't economically feasible.

What made it more economically feasible to install the panels?

Schryer: We asked the companies who bid to provide both lease and purchase options. Choosing to lease the panels for 15 years, instead of us having to buy the panels outright, gave us a financially beneficial project. The third-party company does all the installation and maintenance. They're essentially just borrowing our roof, but we get to use all the energy the panels produce.

What happens after 15 years when the lease ends? Does the company come and take the panels back?

Schryer: In 15 years, they'll become our property. Technically, they sell them to us, but for a marginal cost - like $1. The panels will continue to produce electricity for their 30-year lifespan, and we aren't paying for the lease anymore.

How did you choose where to place the solar panels?

Schryer: Initially, we had planned for more buildings with solar panels, but we found out that they couldn't support the additional weight. You have to have roofs that can support the load. Since the Health Education Building is a new building, it was ready to go. At the Landon Center, we had to do some prep work on the roof.

Does the solar energy go through some sort of battery system?

Do you know what percentage of the building's energy demand is fulfilled by the solar panels?

Schryer: The systems are estimated to produce about 35% of the buildings' annual energy usage.

What will be the ultimate savings because of the solar panels?

Schryer: We estimate about $276,000 over 30 years. It's not a huge amount. But we did this because we want to show that we care about sustainability and clean energy. And it is still a savings.

Webb: There's an immediate payback for the medical center because the projected utilities savings each year are more than the annual lease payments.

So, you had to show that these panels would ultimately save money?

Schryer: We want to be green and support sustainability, but we're also not going to waste the taxpayer's money since we're a public institution. We want to be good stewards of our resources.

Is it a possibility that there might be more solar panels installed in future construction?

Schryer: No current projects are planned, but it's certainly possible. We need a flat, clear, unshaded roof with additional weight load capacity. That's difficult to find!

What else do you think people should know about the project?

Schryer: We're very focused on energy conservation and energy savings, and the solar panels are probably the most visible thing that we've done in reaching for that goal. People are really excited about it!

For fans of both solar energy and numbers, here's the KU Medical Center solar program facts and figures, according to Schryer:

Amount of electricity offset by solar energy in those two buildings: 35% (estimated)

Number of LED lightbulbs powered by solar energy when the solar panels are at peak performance: 5,000 bulbs

Yearly electric bill for all of KU Medical Center: about $5 million for fiscal year 2020