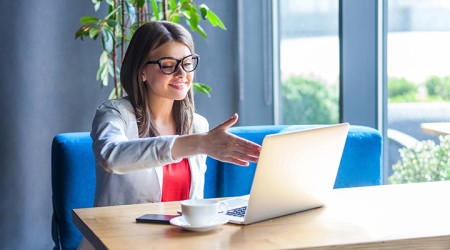 With residency candidates being interviewed virtually, some residency directors are concerned with how this may affect women candidates and people of color. They're working to address potential inequities in the process.

The COVID-19 pandemic has upended so many processes, it's easy to forget the implications of doing something outside the norm. Yet two implications weighed heavily on Kimberly J. Templeton, M.D., professor of orthopedic surgery at the University of Kansas Medical Center.

The first was how women medical students would fare in virtual residency interviews. This all-important job interview determining their first job out of medical school could have some disadvantages for women when compared to the traditional face-to-face interviews conducted before the pandemic.

The second was how a lack of "away rotations," clinical training at sites other than a student's home institution, could alter career trajectories for women. Most of these rotations, a chance for medical students gain to experience outside of their academic medical center, were canceled because of COVID-19 concerns.

Staying put meant that women medical students might never see a woman practicing a specific specialty, especially in those dominated by men such as Templeton's orthopedic surgery. Without these role models, women medical students might be disinclined to pursue that specialty. As Templeton said in a recent article published by the Association of American Medical Colleges, "You can't be what you can't see."

The problem of virtual interviews

Templeton is the residency program director for orthopedic surgery and vice-chair for diversity, equity and inclusion for the KU School of Medicine. Those roles made her sensitive to diversity issues in residency, but she learned she wasn't the only one pondering the implications of the pandemic on residency selection.

Her involvement in the Council of Orthopaedic Residency Directors gave her a chance to discuss these concerns with other program directors and brainstorm tactics to offset unintended consequences.

Pre-pandemic, female medical students could visit residency programs in person and perhaps build on personal interactions with faculty and staff to be comfortable enough to self-promote. That comfort level just isn't the same in a virtual format, Templeton said.

"Women are not very good at self-promotion. We are not taught by society to do that. To some degree, we are frowned upon if we do self-promote," Templeton said. "So, it's hard enough for women to try to explain their abilities and their achievements when they're in person, much less trying to do it over a virtual platform, and for faculty with whom you have never worked."

"We would like to increase the diversity within orthopedics based on both race and gender, but if we're going to get more women in, it's really about getting them to apply and then supporting them when they interview," Templeton said.

So, this past summer and into the fall, Templeton put together a team, including Dawn LaPorte, M.D., professor of orthopedic surgery and vice chair of education at the Johns Hopkins University School of Medicine, and Monica Kogan, M.D., assistant professor and orthopedic residency program director at Rush University Medical Center, to organize a series of national webinars for women medical students interested in the field of orthopedic surgery. The Ruth Jackson Orthopaedic Society and the American Medical Women's Association co- sponsored the series. Templeton is a past president of both organizations.

Women orthopedists from across the United States volunteered for panel discussions. In the first webinar of the series, the panel gave tips for residency interviews. But their presence also proclaimed that women do exist in orthopedic surgery.

Ginger Holt, M.D., professor of orthopedic surgery at Vanderbilt University in Nashville, Tenn., and director of its residency program, told students, "We got together and put this together to make this a really safe space for you to be able to ask any question you want."

Linda Suleiman, M.D., assistant professor of orthopedic surgery and assistant dean of medical education at Northwestern University, is also director of diversity and inclusion for the McGaw Medical Center at Northwestern. Like Templeton, she, too, was worried that COVID-19 had canceled opportunities for students to see people like them in the roles they desired and joined as faculty for the first webinar.

"When you do an away rotation, it really gives you the sense of the cultural competency level of the program, within the residency program as well as at the faculty level," Suleiman said. "Me personally, as a black woman, I was looking for a program that not only had women but had trained other African American residents in the past as well as their faculty. And if they did not, was there a real effort into truly not only diversifying the program, but also offering a program that is inclusive and equitable?"

A quandary for women of color

When each panelist was asked to provide a tip for prospective interviewees, Suleiman offered, "I frequently get asked by women of color medical students interviewing, ‘How should I wear my hair?' and a lot of people will think about that on the interview day. But there's implicit bias as well as explicit bias on how culturally women of color are perceived based off how they wear their hair."

These details are what medical students want to know, Templeton said. Without another woman of color in their medical school to ask, the uneasiness at making the wrong decision could derail the entire interview.

Annelise Chaparro, a fourth-year medical student at KU Medical Center, attended the webinar. She said she appreciated "what the expectation is as far as attire, hair styling and how to best present yourself during the interview."

Chapparo said she feels better about the residency interview process after hearing the panelists' messages. "There's a great deal of uncertainty right now about how interviews are going to go during residency application season, so it was really helpful that they were willing to answer questions from students."

Preparing for applications and interviews

The second webinar in the series allowed women students from around the country to talk with women residents about orthopaedic training and residency applications. For the third, volunteer faculty (both men and women) conducted mock interviews with the students and followed up with feedback.

Kyle Sweeney, M.D., assistant director of the orthopedic surgery residency program, volunteered for the virtual interview event. "The students had exceptional confidence, character and commitment toward their future training and practice opportunities," he said. "They had great questions about how they can strengthen their presentations and be successful in the residency match." 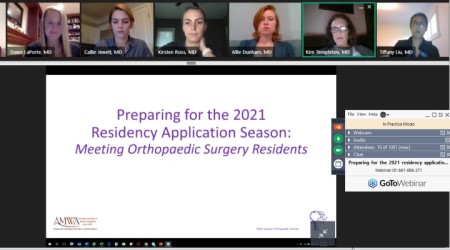 Portion of all male medical residents choosing orthopedic surgery as a specialty: 5.9% (2018-2019)

What will the long-term consequences be?

In addition to addressing problems of inequity in women doctors preparing for their residencies, Templeton is looking at the pandemic's toll on women doctors at all levels of their careers.

In an article posted on the Association of American Medical Colleges website, Templeton specifically addressed these problems: