School of Nursing professor has Kansas roots and international experiences 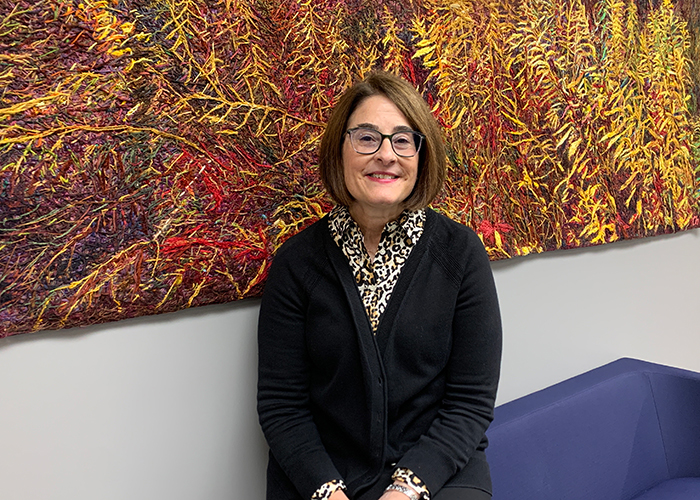 Retired Air Force Col. Karen L. Weis, Ph.D., FAAN, has been halfway around the world – literally. She was deployed initially to the Middle East during Operations Desert Shield and Desert Storm, and then weathered two deployments to Afghanistan and one to Riyadh, the capital of Saudi Arabia.

As a flight nurse, Weis staffed weekly flights to Dhahran, Saudi Arabia, the same place (but a different time) where a bomb exploded, killing 19 at the airbase. She crisscrossed Europe as part of her nursing duties, transporting patients and training other flight nurses.

But when Weis considered retirement from the Air Force, she set her sights on one place: home.

In 2022, Weis became the first-ever Christine A. Hartley Rural Health Nursing Endowed Professor at the University of Kansas School of Nursing-Salina. She is also the associate director of research at the newly created Kansas Center for Rural Health, based in Salina. Weis grew up on a farm near Salina, where her parents still live and farm. Two of her four brothers also farm with the family.

Lisa Larson, Ph.D., dean of KU School of Nursing-Salina, said bringing back a former Salina resident has its perks. “Besides familiarity with the community and surrounding region, Karen understands ‘rural.’ She is connecting and reconnecting with many community members in the health care industry, and the fact that she grew up in this area facilitates and strengthens these relationships,” Larson said.

“When I say I know rural Kansas, that doesn’t just mean farming,” Weis said. “I love Kansas, and I understand what the people of Kansas are going through. Of course, I’ve been gone for 30 years, but my family lives here, and I’ve seen the struggles they went through. I just feel like I’ve landed in a perfect position.”

She shared details about herself and how a former military nurse and leader now conducts research and advocates for the health of Kansans.

Weis has a goal of making a difference for her Kansas neighbors.

“I know people in most if not all of the communities surrounding Salina. When they know that you’re living in the same rural area, I think that makes a difference.”

She loves the new commute.

“I was used to driving an hour to work, and the whole day was affected by the commute. It’s great being five minutes from work.”

As the associate director of research for the Kansas Center for Rural Health, Weis is helping develop collaborations with students, faculty, and communities.

“Students come to me, and they say, ‘I want to do research.’ So, we’re trying to build research and evidence-based practice efforts, with their home communities or other communities, for them to get their feet wet.”

She spent nearly 30 years in the military.

“When I was interviewed for this job, they asked about my mentoring experience. I think when you’re in the military, you take that for granted because every day is spent leading and mentoring. We’re always building the next cadre, the next leader. It’s built into everything, that OTJ – on the job training.”

Her research focuses on maternal and fetal health during pregnancy, but her specialty in obstetrics arose from a job she initially didn’t want.

“When I joined the Air Force, I thought I was going to be a critical care nurse. In nursing school, I did not like maternal and child [health] – I didn’t like it at all. But the Air Force needed me to be an OB nurse in Altus, Oklahoma. I came home, and I was in tears. My husband told me, ‘Suck it up. You can do this.’ To make a long story short, I worked with some great people, and I discovered I actually did like OB.”

Weis developed and piloted an intervention for women in their first trimester of pregnancy that in clinical trials lessened the chance of giving birth to an underweight baby.

“If you’re going to do anything to affect low birth weight, it needs to happen early. … The intervention is built on the idea that women need support in their first few months. They’re dealing with being a mother, they’re preparing for labor and dealing with concerns of their well-being. The intervention fosters support and mentoring aligned with the changes that come with pregnancy.

Her newest research project was recently funded and will examine the nursing workforce of rural Kansas and critical-access hospitals.

“I’m working with the nurses here in Salina, and we’ll be engaging with leaders and nurses from various surrounding communities, this summer.”

Weis loves being a recruiter for her chosen profession.

“I think there is no greater role than being a nurse. We’re the most trusted profession, but I think we’re also the most underrated. … We have a role that is important in educating patients, educating the community and making a difference in public health. You can be whatever you want to be, but you have to envision it.”