The annual Jessie M. Ball Lecture and DPT pinning ceremony on Oct. 4 embraced physical distancing but still invited the 59 DPT students of the Class of 2023 to the University of Kansas Medical Center’s Kansas City campus.

Doctor of Physical Therapy students from the Class of 2023 take the oath of their profession in the Health Education Building. Students were socially distanced and wore masks as precautions against contracting COVID-19.

Students pursuing a doctor of physical therapy (DPT) were able to meet their classmates, take an oath to their profession and learn a little bit more about the history of the department they've chosen for their academic home.

The annual Jessie M. Ball Lecture and DPT pinning ceremony on Oct. 4 embraced physical distancing but still invited the 59 DPT students of the Class of 2023 to the University of Kansas Medical Center's Kansas City campus.

In the Health Education Building (HEB), students sat at tables with their pins in front of them, ready to be worn only after an oath of service was recited. Before that crowning event, Abiodun Akinwuntan, Ph.D., MPH, MBA, dean of the School of Health Professions, welcomed the DPT students in the HEB as well as friends, family and alumni watching the lecture and ceremony via a Zoom link.

The lecture, while historically tied to the pinning ceremony, is also the unofficial kickoff of Alumni Reunion Weekend, which began the next day.

To the students Akinwuntan said, "Let me congratulate you on being accepted into a program that is ranked as one of the best in the country. You know what you had to go through to be accepted, and we are happy that you're here with us."

After sharing that he, too, studied physical therapy, he said, "The words I would leave with you is to keep doing your best as you continue your journey. None of us can predict what will happen tomorrow, but your safety and the quality of education are two things that remain very important to us."

Stephen D. Jernigan, PT, Ph.D., director of the Doctor of Physical Therapy program, then noted the department's 75th anniversary in 2019 and introduced the evening's lecturer.

Marsha Melnick, PT, Ph.D., served as the third-ever department chair of physical therapy at KU Medical Center from 1981 to 1990. "Dr. Melnick's time as chair was transformational as she started our department's development toward a research-intensive program," Jernigan said.

From her home near Seattle, Washington, Melnick shared via teleconference her memories of her colleague Jessie Ball for whom the lecture series is named and funded.

She said Ball was part of a "gang" of academic women in physical therapy with offices on the same floor, and Ball was "an excellent teacher" and "a remarkable clinician." She also had a talent helpful for any physical therapy professor: she could imitate any number of walking problems.

"Jessie was well known to her students for her ability to imitate gaits. And she had one gait that to this day, I cannot fathom how to do, and that's someone with a bilateral lower-leg amputation stepping over a 3-foot fence," she said.

Melnick traced her own professional path, including her work integrating students with neuromuscular diseases into mainstream classrooms at the dawn of the integration movement. "Our children made a lot of progress. But we had no control group, and none of us had done research (before). So there were some flaws in our experimental design," she said. "But we did find enormous improvement. And one of the things we were asking is, does the child learn better, and indeed, the child seemed to do better in the classroom."

While at KU Medical Center, she studied the effects of the chemical MPTP on movement. "MPTP was an impurity found in homemade heroin, which was causing Parkinson's disease in young adults, initially in San Francisco," she said.

When rats were trained to exercise on a narrow beam before being given MPTP, they did not show symptoms of Parkinson's disease.

"They actually did not lose much dopamine and their gait pattern looked like a normal old rat," Melnick said. The results led to viewing exercise as preventive therapy and as a treatment for disease.

She urged the DPT students to "find your group of 10" in the weeks ahead. "The words I was given when I first became a chair, and we went to chair meetings, was to find a group of 10 other chairs I could call when I was pulling my hair out, and I thought it was very good advice."

DPT student Molly Devine said one reason she enjoyed the pinning ceremony was because it allowed the Class of 2023 to come together.

"I also had not yet seen all of my classmates in person before, so being with all of them in one room celebrating our acceptance into the program was very exciting," Devine said.

She said she joined the DPT program after seeing firsthand the power of physical therapy. "After suffering multiple injuries as both a high school and college athlete, I experienced the positive impact that physical therapists can have on someone's quality of life," Devine said. "Being able to do the same for others will be incredibly rewarding."

Fellow DPT student Joshua Larson said he picked physical therapy as a career because of "the chance to meet people in their moments of greatest weakness and help them find strength to overcome and grow."

Larson's background affected how he viewed taking an oath to his new profession. "As someone who has taken oaths in the past for military and police service, I understand the weight and obligation I am taking upon my shoulders," Larson said. "These previous oaths are still a part of how I live my life, and I believe my oaths as a physical therapist will similarly guide me going forward. 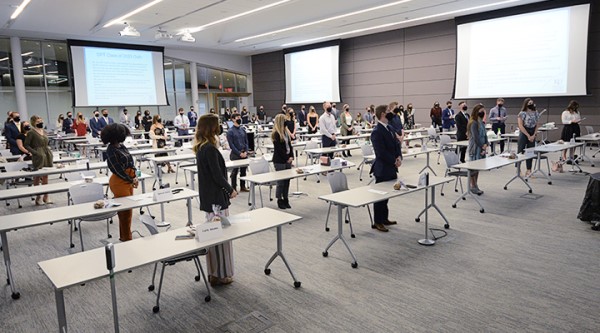