Clinical assistant professor Jennifer Cheng, M.D., is one of about 550 female board-certified neurosurgeons in the nation. 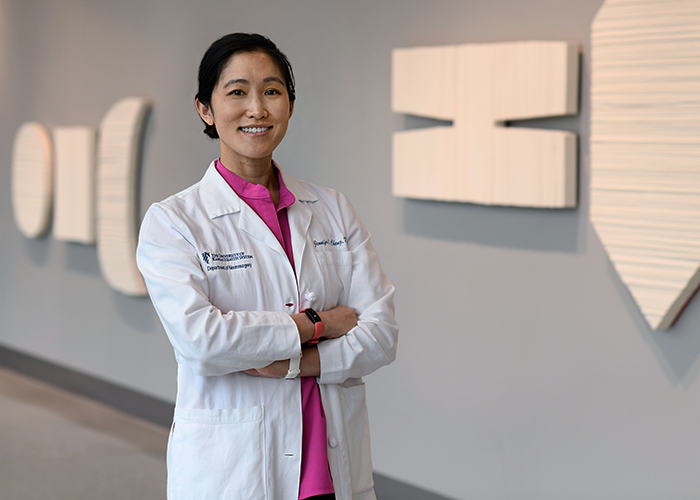 Although women now make up slightly more than half of all medical school graduates, it’s still uncommon to see a neurosurgeon who is a woman. Jennifer Cheng, M.D., a clinical assistant professor in the Department of Neurosurgery at the University of Kansas Medical Center, is at the forefront of showing the next generation what’s possible.

According to the American Board of Neurological Surgery (ABNS), the primary organization that certifies neurosurgeons in the United States, only about 550 of approximately 6,200 full-time, board-certified neurosurgeons, or 9%, are female.

Cheng is one of them.

“I think one of the most important reasons we need women in academic neurosurgery is to show people that it can be done and to inspire medical students and residents that it’s completely possible,” Cheng said. “Neurosurgery shouldn’t be something you cross off your list. Don’t be like me when I was younger and decide you could never do surgery. It’s actually something that you can do.”

Cheng has been at KU for five years. In addition to training residents and medical students, she specializes in treating people with epilepsy and movement disorders such as Parkinson’s disease, essential tremor and dystonia. Although both areas are experiencing incredible growth, it’s especially true of epilepsy.

“Dr. Cheng is a national leader in her field,” said Paul J. Camarata, M.D., chair of the Department of Neurosurgery at KU Medical Center. “As director of our epilepsy surgery program, she has helped make us one of the top performing epilepsy programs in the country. We are blessed to have her here.”

Cheng is part of the Department of Neurosurgery study team looking at the feasibility, safety and initial effectiveness of using MRI-guided focused ultrasound to treat focal epilepsy. KU Medical Center is one of four sites in the nation participating in the clinical trial.

In MRI-guided focused ultrasound, doctors use magnetic resonance imaging to guide them and pinpoint the exact location of the brain to focus beams of ultrasound, or soundwaves, hot enough to cause a burn that destroys the targeted tissue but leaves the surrounding tissue unharmed. The results and data from the clinical trial will serve as a basis for more studies to determine broader use of focused ultrasound as a treatment for epilepsy. Focused ultrasound is currently approved by the U.S. Food and Drug Administration to treat essential tremor and tremor-dominant Parkinson’s disease, and it’s being investigated as a potential treatment for other conditions such as epilepsy.

Cheng also sees patients at KU Medical Center’s clinical partner, The University of Kansas Health System, which over the past couple of years consistently ranks nationally as one of the highest-volume centers for surgeries to treat medication-resistant epilepsy.

Cheng believes KU Medical Center is on the cusp of contributing to research that will lead to important medical breakthroughs that will ultimately help people with epilepsy. It’s one of the reasons she remains so enthusiastic about her chosen subspecialty and looks forward to growing both the epilepsy and movement disorders programs.

“This is a very rewarding subspecialty because you have the ability to really change the quality of life significantly for people who are struggling,” she said. “Most of the things they’re dealing with are not necessarily a death sentence, but they are completely disabling. If we’re able to treat them, then it’s extremely rewarding.”

Cheng hails from a family of scientists. She seemed destined to follow the same path after completing a bachelor’s degrees in biomedical engineering from Vanderbilt University and a master’s degree in bioengineering from the Massachusetts Institute of Technology.

That’s when she began wondering if she really wanted to spend her days in a lab.

“Medicine became a lot more appealing because you can see the consequences of what you’re doing. You treat people and they get better,” she said.

As a medical student at Johns Hopkins University, she considered neurology and psychiatry, then she entered her surgical rotation and discovered how much she enjoyed it.

“I realized that it’s amazing to work with my hands and how gratified I am by some of the immediate results I see when I treat patients,” she said. “It was kind of roundabout how I ended up going into neurosurgery, but I finally got there and it’s a great fit.”

Throughout her training, Cheng credits multiple faculty and peer mentors, both men and women, for helping her along the way. In fact, she still remembers one very early formative experience when she was a medical student and a female neurosurgeon allowed her to actively participate in the operating room. To this day, she’s friends with some of the few women who were on the interview trail with her as she was trying to get into residency.

As Cheng carves out a path in the profession, she notices the growing number of women entering the specialty, including during this year’s cycle of interviewing medical students for placement in the neurosurgery residency program at KU Medical Center.

“I just think it’s a slow-moving thing, but I’m very happy it’s changing,” she said. “Women have just as much to offer in this specialty.”

That message of belonging is what Cheng most wants the generation following in her footsteps to hear and embrace.

“You absolutely can do it. There may be times when you don’t feel like it’s worth it because the training is long and tough, and after finishing your training, it’s not an easy, breezy lifestyle. At the same time, it’s completely rewarding. I get to help people every day,” she said. “I love what I do. There are times when you have to juggle things around a bit, but it’s totally worth it. I wouldn’t give up anything.”