Ila Armsbury Herman, a 1937 graduate of the nursing program at the University of Kansas, shared with her niece the details of her time at KU and as an army nurse in World War II. The result was the book 'Ila's War.' 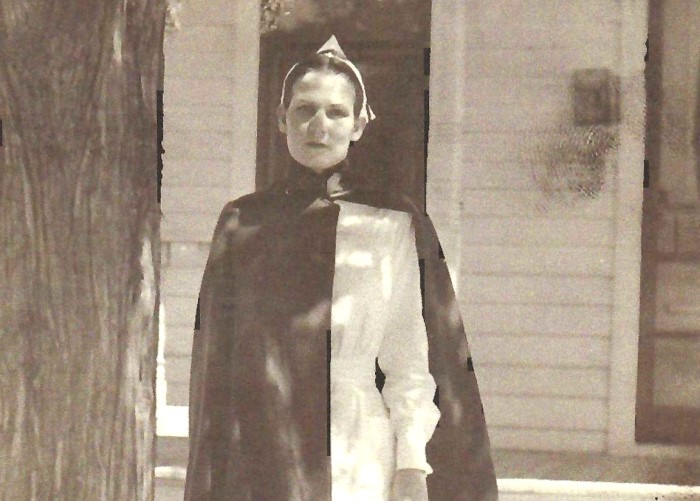 Ila Armsbury, a 1937 graduate of the nursing program at the University of Kansas, is the subject of a recent book titled "Ila's War." Armsbury wears the nursing graduation garb common for the day, including a cap and cape. Photos courtesy Cindy Entriken.

Editor's note: Ila Armsbury Herman's story is being shared as part of Women's History Month, observed in March. For other notable women who have contributed to the University of Kansas Medical Center's history, check out the university's Facebook, Twitter and Instagram accounts.

When Ila Armsbury Herman visited Kansas City in 2000, the 1937 graduate of the nursing program at the University of Kansas knew exactly where she wanted to go first.

So, her great niece drove her back to 39th Street and Rainbow Drive to see how her alma mater had changed in the 63 years since she donned her cap and cape at graduation. The stories she told of her nursing education, her work as a labor-and-delivery supervisor in disadvantaged sections of Kansas City and her time as an Army nurse all became part of a book, "Ila's War." It was published just before Veteran's Day 2020.

Her great niece, Cindy Entriken, said she felt compelled to write the book after listening to her aunt's stories.

"She was a fascinating person," Entriken said. "She loved KU and her time there. But her financial position was rocky, and her parents offered little support for her to complete her education." Nonetheless, she graduated despite adversity.

That time she tossed out the dean...

Back in 1934 when Ila first began her nursing education, the nursing program was a department in the School of Medicine. (It would be 1974 before the School of Nursing became its own entity.) So, imagine Armsbury's chagrin one particular night on the ward at the Bell Memorial Hospital (now known as the first hospital in the University of Kansas Health System).

That night, her very first night shift as a student nurse, a shabbily dressed man opened the door to the ward at 2 a.m. Since Armsbury knew there had been problems with drug addicts stealing narcotics in the middle of the night, she sternly rebuked the man with, "Visiting hours were over at 9," and marched him to the door. He said nothing and promptly left, but later Armstrong learned the "visitor" had been Harry R. Wahl, dean of the KU School of Medicine.

"My first thought was I would be kicked out of nurse's training," she said on a recording of the story now housed on Entriken's website.

It turns she didn't have to worry. "He had gone to the doctor's dining room that next morning and told them how that little ‘proby' (probationary) nurse had thrown him off his own ward," Armsbury continued. "He thought that was hilarious." (Listen to Armsbury tell the story in the video below.)

Armsbury was selected for a six-month post-graduate course in obstetrics and gynecology at KU. That experience lead to a position with the KU School of Medicine. Within the homes of Kansas City's poorest neighborhoods, Armsbury taught medical students to set up and maintain a sterile field for at-home births.

"One of the stories that my mom told me, a story that Ila told her, was about delivering a baby to a woman who, together with her husband, lived in a huge wooden crate that had been used previously to ship a piano," Entriken said. "That describes the desperation of people living in the slums."

Moya Peterson, Ph.D., APRN, professor in the KU School of Nursing and the KU School of Medicine, read "Ila's War" because of her lifelong interest in history and how that history relates to nursing. Peterson created a documentary on the 77th Evac Hospital in World War II because it was staffed with nurses from Kansas. She also speaks to groups about the service of nurses in armed conflicts.

Peterson's recollection of "Ila's War" was the hardship of Ila's early years and the pride she felt in graduating from KU. She called Armsbury's post-graduate work uncommon for 1937.

"Being able to teach medical students - that was unusual for a nurse of that time. But since medical students generally were male, and this was obstetrics, it was advantageous to have a woman in this position because there were so few lady doctors," Peterson explained. "But still, she was a woman who taught medical students, and that was uncommon."

Serving as Army nurse in WW2

When the United States entered World War II on Dec. 7, 1941, Armsbury was already serving as a reservist in the U.S. Army Nurse Corps. In fact, Pearl Harbor was attacked just two days short of her one-year anniversary in the corps. Nurses had been actively recruited because of a shortage of nurses in the war overseas, and Armsbury answered the call.

According to newspaper clippings kept by Entriken's great aunt, she was one of the first Kansas City-area nurses to volunteer. She served until July 1946, more than 10 months after the war ended. Armsbury's service included two years in Australia with the U. S. Army's 155th Station Hospital.

When nurses returned from the war, they found a health care system that wasn't ready for them, explained Peterson. With their experience, nurses wanted more autonomy and responsibility on their wards, but the status quo wanted them to return to subservient roles.

"Women really changed in those years, because they knew they could do the jobs, and they could be independent," Peterson said. "Nurses were no exception. Nurses realized they could make a huge difference in the way patients were cared for."

In 1997, Ila Armsbury (now Ila Herman) attended the dedication ceremony for the Women's Memorial at Arlington National Cemetery.. In 2003, Herman passed away, just three years after sharing her stories with her great niece that would one day become "Ila's War."

Setting goals and exceeding them

"Ila's goals were to become a nurse, travel and see the world," Entriken said. "Ila's story demonstrates the importance of defining and committing to one's goals and then persevering over what may appear to be insurmountable opposition."

Digital and print versions of the book can be purchased on Amazon and from Entriken's website.

She said she'd love it if nursing students and faculty learned of Ila's story. "Faculty can use Ila's story as an example of a former student who succeeded despite the odds," she said. "Students can benefit from a real-life role model who once walked the same path they are walking now."

The book cover of "Ila's War." The biography was written by her great niece and is available on Amazon and at the author's website.
Ila Armsbury's graduation photo from nursing education in 1937. This photograph is inscribed to her mother.
Armsbury sent this postcard to her parents telling of a fire in her residence hall while enrolled in nursing education. The fire in Hinch Hall was put out quickly, and Ila used the opportunity to show her parents which room was hers.