Controlling hypertension is important to brain health as well as to cardiovascular health, but the condition often is not well managed. Researchers at KU Medical Center have designed a home-based hypertension program they hope will help. 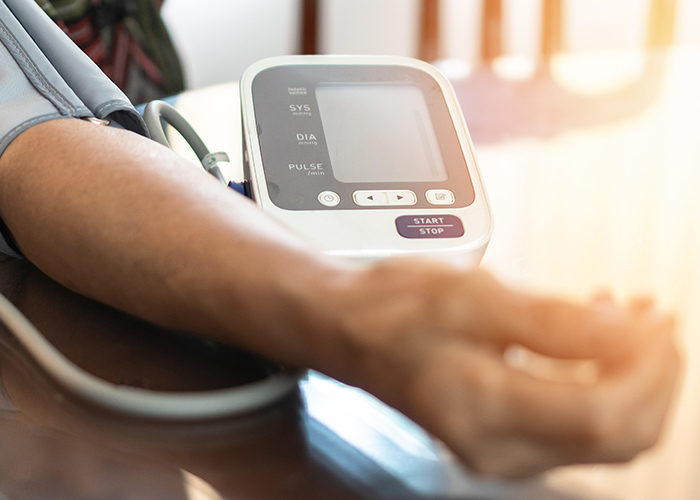 The American College of Cardiology recommends home blood-pressure monitoring, but there are no established guidelines for how to implement a home-based system for hypertension patients.

Only about half of people with hypertension have adequately controlled blood pressure, and this problem is only getting worse, according to research published in 2020 in the Journal of the American Medical Association.

Meanwhile, high blood pressure, which affects three-quarters of the population age 65 and older, has long been known to lead to heart problems, stroke and kidney disease. And over the past decade, it has emerged as a risk factor for another health problem of concern to older adults: cognitive decline and dementia.

“The way we currently manage hypertension is flawed,” said Aditi Gupta, M.D., associate professor in the Division of Nephrology and Hypertension at the University of Kansas Medical Center. “We rely on office-based blood pressures, which are often inaccurate and infrequent.”

Gupta is looking to change that. She and co-principal investigators Jeffrey Burns, M.D., co-director of the University of Kansas Alzheimer’s Disease Research Center, and Russell Waitman, Ph.D., now associate dean for informatics at the University of Missouri-Columbia, have been awarded a five-year, $12 million grant from the National Institute on Aging. The grant funds a clinical trial that measures the effectiveness of a virtual home blood-pressure monitoring program in controlling hypertension and slowing age-related cognitive decline while reducing cardiovascular problems as well.

“If clinicians in primary care can more effectively and aggressively treat hypertension, that has been shown to reduce the risk of mild cognitive impairment and dementia,” said Burns. “For instance, if we achieve better blood-pressure control in 100 people, we can prevent one or two of those individuals from developing cognitive impairment over the next five years. That might not sound like much, but if our team-oriented, home-based system can be scaled up and used elsewhere to manage thousands of patients, it can have a real public-health impact.”

The trial, Remote Monitoring and Virtual Collaborative Care for Hypertension Control to Prevent Cognitive Decline Phase 11 (vCCC-2), builds on the researchers’ pilot study, vCCC-1, conducted in 2020 to test the safety and feasibility of a virtual home blood-pressure program. Potential participants were identified through The University of Kansas Health System’s electronic health records and referred to the study team for screening and enrollment.

Participants were aged 65 or older and had a systolic (top number) blood-pressure reading of at least 160 at a clinic visit, or at least 140 at two clinic visits. They were given blood-pressure cuffs that were electronically linked to a hypertension dashboard that could be read by pharmacists at the health system. For three months, study participants in the intervention group took several readings a week at home. The results were automatically sent to the dashboard where the pharmacists could monitor them.

“These are clinical pharmacists who go through additional training on chronic disease management, and they are qualified to manage patients with complex medical histories,” noted Gupta. “They’re part of the primary care physician’s collaborative care team.”

These pharmacists talked to the study participants at least once a month by phone and made any necessary adjustments to their medications. Participants in the placebo group received education and a blood-pressure cuff, but their readings were not monitored by a pharmacist.

The vCCC-2 study expands on vCCC-1 in both volume and scope. For vCCC-2, the researchers plan to enroll 1,000 participants, total, from The University of Kansas Health System as well as the University of Utah Health in order to test the intervention across different health systems. Gupta reached out to Srinivasan Beddhu, M.D., now the principal investigator at the Utah study site for vCCC-2, because he was involved in SPRINT, a major study that demonstrated that lowering blood pressure to below 120 decreased the risk of heart disease and death much more effectively than the standard reduction to below 140.

SPRINT also showed that this intensive lowering of the blood pressure was not harmful for cognitive function. As Gupta noted, some clinicians believed that lowering blood pressure too much could reduce the blood flow in the brain enough to impair thinking and memory, but SPRINT suggested otherwise.

“Our vCCC study is the next step to the SPRINT trial,” said Gupta. “The SPRINT study showed what we need to do — lower blood pressure. Now we will show how to do it.”

The study led by Gupta and her colleagues includes participants who are generally excluded from other clinical trials, such as people who are frail, have limited mobility or lack transportation. The participants in vCCC-2 will be in the study for two years. In addition to measuring how well the program affects the participants’ blood pressures and risk for heart attacks, stroke and other cardiovascular problems, the researchers will test their cognition using a battery of tests administered over the phone. The goal is to discover whether the participants who are receiving care via the home blood-pressure program experience less cognitive decline than those in the control group.

Testing both how well the home blood-pressure program works and its effects on health in the same study saves time, Gupta noted — an important aspect of the study, given that implementing new evidence-based guidelines often takes years.

Since enrollment began in November 2021, more than 300 participants have entered the study, and Gupta said she has received much positive feedback from participants, physicians and pharmacists. “This is something that can be continued even after the funding for our grant is over,” noted Gupta. “This is a real-world trial for us.”

If you are at least age 65 years of age, receive care at The University of Kansas Health System and would like to find out more about participating in this study, please ask your primary care physician to refer you to the vCCC-2 study team.