Gregory Jones, a student in the Doctor of Nursing Practice program at the University of Kansas School of Nursing, learned about nursing from his mother’s studies and is now charting his own path in psychiatric care. 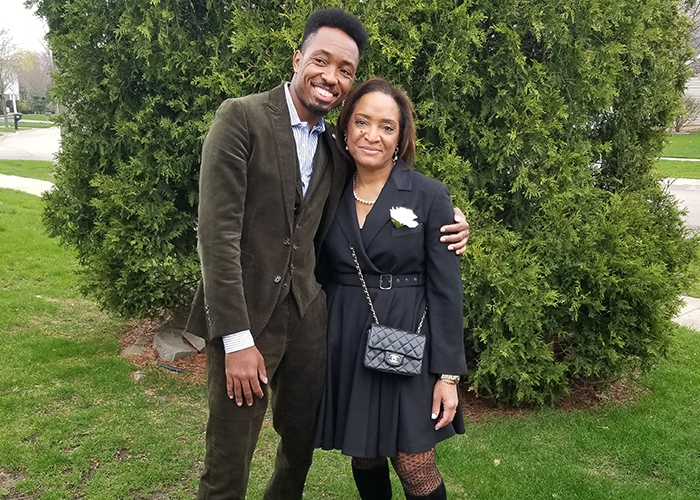 Gregory Jones, a student in the Doctor of Nursing Practice program at KU School of Nursing, selected his career path after witnessing his mother pursue an advanced degree in nursing.

Lucinda (Cindy) Whitney, DNP, APRN, clinical assistant professor in KU School of Nursing, said she met Jones in 2018 at a Kansas American Psychiatric Nurses Association (APNA) meeting. “He came to do training for our chapter, and I was so taken by Gregory that I encouraged him to explore KU for his DNP education.”

Both Jones and his mother, Deborah E. Jones, Ph.D., were inducted into Sigma, an exclusive nursing honor society that inducts honorees based on exemplary grades and leadership skills. Gregory was inducted in a virtual ceremony in 2020 and his mother in a ceremony 20 years earlier.

An article by Sigma initially shared the story of the two generations of nurses; this version focuses on Gregory, who is completing his DNP online from KU School of Nursing from his home in Washington state.

Recently, Jones gave up his lunch break at the APNA conference in Long Beach, California, to answer these questions about his decision to pursue nursing as a career.

Q: So, why did you decide to follow in your mom’s footsteps and get an advanced degree in nursing?

Jones: One of the reasons why I decided to get a nursing degree is that I knew I’d have the opportunity to design my own altruistic path. I believe we need to make an impact on the world, through servant leadership. I knew nursing was the formula for that opportunity because I’d already seen her do magical things in her career. She really challenged the status quo, shaking the things up and pushing the discipline forward in innovative ways. Because of her, I knew I had that same capacity within myself.

Q: Why is it important to you to be a changemaker, to provide that servant leadership?

Jones: The behavioral health system in our country is broken, and because mental health has entered the public discussion, we finally have an opportunity to alleviate some of the gaps and engage stakeholders. The DNP (program) has really given me a platform to examine theories, innovations, and bridge that into practice. We can take available options and disseminate them not only in the academic arena, but across the industry.

Q: So, how are you putting those behavioral health theories into practice?

Jones: We’re opening a peer respite center in Tacoma, Washington. It’s voluntary alternative to psychiatric hospitalization or an emergency department for people in need of mental health assistance — a 24/7 facility staffed by peer counselors, all with experience overcoming personal challenges. And people will be able to go there when they’re dealing with a stressful situation or some form of mental distress. It’s just the alternative we desperately need in this country.

Jones: We’re going to be the first one in the Pacific Northwest.

Q: How did you come up with the idea to open the center?

Jones: For a long time, the peer support community in Washington has been very strong, and there’s been a lot of advocacy for bringing more recovery-oriented solutions to outpatient behavioral health. For a while, I participated in that activism. I did art installations to commemorate those who had been failed by the system. I established my presence in the peer counselor community … and eventually, I wrote a grant with my mother (for the center) to get funded.

Q: So, how do you manage to maintain a strong mother-son relationship under the pressure of a new venture like this?

Jones: I just lean on her when I need help. It’s not like we went into business together. While I was figuring out what was going to work in Washington, and when things started gaining traction and I couldn’t handle all the demands on my own, she was there to help. She just wants me to be successful.

Q: How did you get involved in behavioral health as a career focus?

Jones: When I got out of nursing school, I went to live with Native Americans in Arizona, and I was on the reservation for two years. The elders told me, “You know, you have a real knack for psychiatric situations. We want you to specialize in it.” And in my research into psychiatric nursing, I learned that crisis stabilization was at the forefront.

Q: In the Sigma article, your mother mentioned you initially wanted to be a funeral director. What happened to change your mind and pursue nursing?

Jones: (Laughing) I realized it would gridlock me. I felt called to not only provide value to a community but to the whole country. Nursing allows me to make logical things happen, to collaborate with people who think along similar lines and have similar aspirations for society.