Class of 2022 enjoys a return to in-person graduation ceremonies

Hooding and Recognition Ceremonies were held in person with an audience of the graduates’ friends and family. In Lawrence, graduates attending commencement heard advice from KU Medical Center’s Steve Stites, M.D. 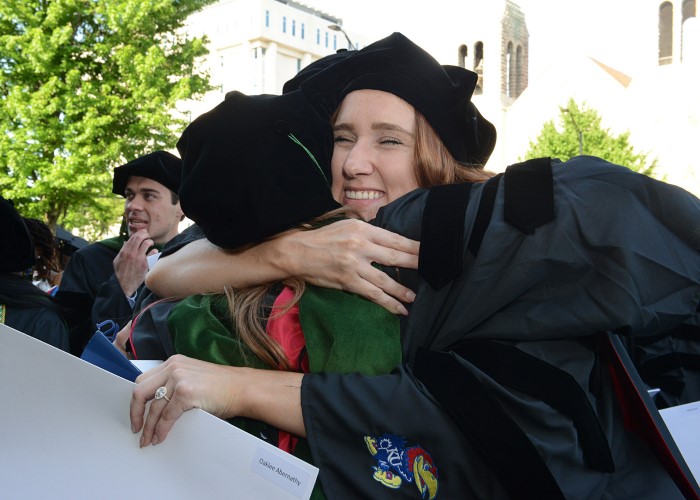 Outside the Hooding and Recognition Ceremony for KU School of Medicine. Photos by KU Medical Center Photography Services

After being limited to video livestream for the last two years, the 2022 Hooding and Recognition Ceremonies for the University of Kansas Medical Center were held in person at the Soldiers and Sailors Memorial Hall in Kansas City, Kansas, on May 14.

The KU Schools of Health Professions, Nursing and Medicine honored their graduates one day before the University of Kansas commencement in Lawrence, where a KU Medical Center vice chancellor was the featured speaker.

Memorial Hall had been the traditional location for the Hooding and Recognition Ceremonies, but the classes of 2020 and 2021 could not follow that tradition. Their ceremonies were virtual, with graduates gathered at home in the close-knit “bubbles” of friends and family common during the COVID-19 pandemic.

The Class of 2022, however, was fortunate enough to have Wyandotte County’s COVID status declared “medium” and the number of COVID hospitalizations at a plateau. Just 17 days before the event, the mask requirements were amended to make masks optional on the KU Medical Center campus and related events.  So, the face-to-face, traditional ceremonies with friends and family went ahead as scheduled. Each school had its own separate ceremony, as the schools have in the past.

“How wonderful it is to be back in person,” said Sally L. Maliski, Ph.D., RN, FAAN, dean of KU School of Nursing, to nursing graduates. “Isn’t this exciting, after so many years, to be back in person to really celebrate this momentous milestone in your lives and careers.”

Shaped by a pandemic

Despite the return to face-to-face ceremonies, the impact of the COVID pandemic remained cognizant in the speakers’ remarks.

Robert D. Simari, M.D., executive vice chancellor for KU Medical Center, said to the graduates of the School of Medicine, “You’ve had quite an unusual academic journey, but you’ve demonstrated that even a global pandemic could not stop you from reaching this day.”

In that same ceremony, Douglas A. Girod, M.D., chancellor of the University of Kansas, reminded attendees of Barney Graham, M.D., an alumnus of KU School of Medicine and Time Magazine’s Hero of the Year for his work on the COVID-19 vaccine. “Without a Jayhawk, we probably would not be in this room together right now.”

The School of Medicine’s featured speaker, Giulia A. Bonaminio, Ph.D., senior associate dean for medical education, told graduates that the pandemic “has shaped you and informed you, but don’t let it define you. Use what you’ve learned, the good and the bad, about yourself, your family, your friends and your community.”

The medical center’s Class of 2022 included:

The threat of severe weather pushed back the commencement ceremony in Lawrence on May 15. Originally scheduled to begin at 10:30 a.m., the traditional walk down the Hill was rescheduled four hours later than originally expected to avoid thunderstorms.

Steven Stites, M.D., a faculty member at KU and vice chancellor for Clinical Affairs at KU Medical Center, was the featured speaker at Sunday’s university-wide commencement in Lawrence. In addition to his roles at KU Medical Center, Stites is chief medical officer for The University of Kansas Health System. Stites became a national figure in the COVID-19 pandemic. On the health system’s morning update, streamed live on Facebook and then also on YouTube, he served as a daily source of pandemic information for the community and the media during the height of COVID-19 fear and infection.

He remains a steady voice promoting science with regular visits to the update, and he hosts the show on Wednesdays under the title “Open Mics with Dr. Stites.”

Though now recognized regionally and nationally for his role during the pandemic, Stites offered this humorous self-deprecation to start of his speech: “I don’t know if Dr. Girod realized when he invited me, he was inviting somebody with the head of Picard and the ears of Spock. Hopefully you remember who those (characters) are.”

On the more serious side, he urged the graduates to “be the bridge. When you reach across communities and you form bonds instead of boundaries, anything can happen. Greatness can happen.”

That message was part of five rules Stites imparted. After the speech, he indicated those rules are what he wanted people to remember because they were the basis of his message: giving grace. “Granting positive regard to others helps open up conversations that are based in truth and honesty as opposed to friction and anger,” Stites said.

Stites said speaking at commencement was “a complete honor and totally unexpected.”

“The University of Kansas benefits from terrific leadership, and that was completely demonstrated during the pandemic when KU nation rose to the challenge and kept the school safe, our students and each other safe, and the community safe,” Stites said. “It was truly a remarkable example of teamwork and it was an honor to be able to talk about that.”