Christopher Neal, Ph.D., research associate at the University of Kansas Medical Center, donated around 100 headbands for face shields to PPE for KC. Neal used the 3D printer at work. 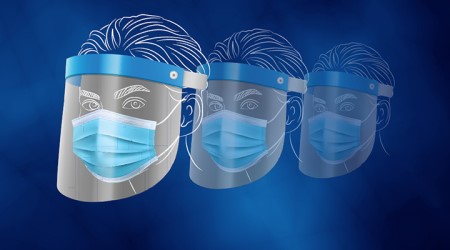 Research has shown that face shields, like the ones above, can reduce inhalation exposure by 96%, making them valuable personal protective equipment (PPE).

Christopher Neal wanted to help health care workers on the front lines of the COVID-19 pandemic, so he joined a regional "maker army" creating protective face shields for medical personnel.

Face shields have been the No. 1 item to for area hobbyists to make because of their relatively simple design. Groups from high schools, neighborhoods and even universities (such as the University of Kansas Center for Design Research and the Spencer Museum of Art) are filling orders normal manufacturers cannot right now.

Neal, Ph.D., is a research associate for the Kansas Intellectual and Developmental Disabilities Research Center (KIDDRC) at the University of Kansas Medical Center, and he leveraged his own skills as a scientist and a sculptor and joined the group PPE for KC-Kansas City Metro. With the KIDDRC leadership's blessing, Neal has been using the KIDDRC's 3D printer to produce these sought-after pieces of personal protective equipment (PPE).

As part of his pre-pandemic position, Neal 3D printed items for KU Medical Center researchers to assist in their experiments. He's made parts to go in mouse mazes for a behavior laboratory, adapters for microscopes and customized covers to go over cages when the original top didn't lend to videotaping the animals inside.

In the spring, Neal's project list is usually filled traditional poster printing for researchers presenting at conventions. But this was no ordinary spring, and when the convention trips for researchers dried up, so did the need for a lot of his services.

"Everything sort of ground to a halt," Neal said. "So I knew there was maybe an opportunity to help with PPE for the medical community."

Once he received the department's blessing, Neal began using the KIDDRC's Ultimaker S5 3D printer to print headbands for face shields out of thermoplastic.

The simplicity of the design belies how effective face shields can be at protecting someone from another person's cough or sneeze. One study reported a 96% reduction in inhalation exposure at distances where subjects were 18 inches apart and a 92% decrease when they were 6 feet apart.

‘I was able to at least do this'

Neal said he used materials currently in the KIDDRC inventory, with permission, and donated his completed face shields to the organization then named PPE for Docs. (In mid-April, the organization changed its name to the more inclusive

PPE for KC-Kansas City Metro.) Though he doesn't know where his shields ended up, he does know that The University of Kansas Health System was one of the beneficiaries of the group's work.

He donated around 100 face shields to the effort, a small percentage of the 7.000+ face shields PPE for KC-Kansas City Metro says it has donated, but a few more than health care workers would have had otherwise.

"I follow the news relatively closely in terms of pandemic coverage. It can all feel a little bit overwhelming, or like there's just so much happening," Neal said. "So being able to do even a small thing -- to meaningfully contribute to efforts -- it's something you can point to and say, ‘I was able to at least do this' as opposed to just sort of reading and feeling a little overwhelmed with all of the negatives."

Michelle Winter, B.S., core operations manager of Disease Model and Assessment Services at KU Medical Center, is Neal's immediate supervisor. She said the COVID-19 pandemic spurred him to serve the greater need of the university and The University of Kansas Health System.

"Christopher's empathy toward others and helpful nature allowed him to jump right in to the current situation and fill an ongoing need in a compassionate and efficient way. We are all privileged to be able to reach out to Christopher when needs arise," she said.

Neal has undergraduate degrees in both biology and art with a sculpture emphasis. He received his doctorate in neuroscience from KU Medical Center in 2016 and has worked as postdoctoral researcher and fellow as well as his current role.

About PPE for KC-Kansas City Metro and the face shields

PPE for KC-Kansas City Metro has now grown to 650-plus members on Facebook, and it connects makers with people who need equipment. The group also shares information with each other and offers encouragement to both makers and health care workers alike.

"Just the way the participants are communicating with the people involved, and how they've tried to organize this effort, has seemed pretty impressive," Neal said. "It's also people who have a need and are wondering how they can request things. The group has been very useful because it can cross-cut into a couple different aspects of the shortages."

Makers, including Neal, started constructing the first shields (far left of image) from a design by Prusa, which manufactures 3D printers. The next iteration (middle) was a "quick print" of the Prusa design, reducing print time and the materials used. The third face shield, from a Swedish design, marked PPE for KC's "Phase 2" of construction.

Neal said PPE for KC instructed participants on which materials were appropriate for use on the prints."Several of these face shield designs have been reviewed by the National Institutes of Health for different uses and are actually available through an NIH 3D print exchange," he said. 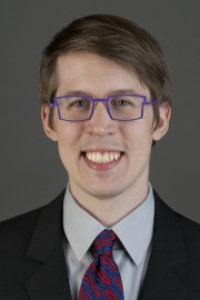 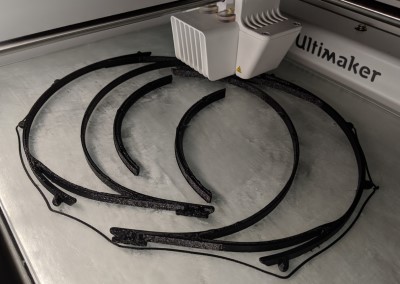 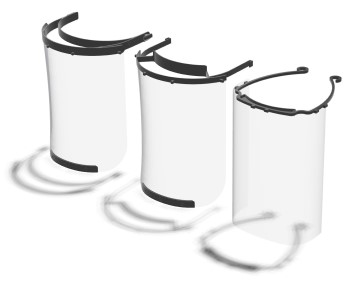 Photo 2: Two shield pairs can be printed at the same time using a 3D printer. This photograph, submitted by Christopher Neal, shows the bands he printed that became part of face shields for health care professionals. They're made from a filament of polyethylene terephthalate glycol-modified (PETG).

Photo 3: Neal, who creates visual elements so scientists can better explain their work, created this rendering of the three types of face shields he printed and donated to PPE for KC-Kansas City Metro. Each subsequent design took less time and material to print.