The FSHD CTRN, an international network of academic research centers, uses the expertise and infrastructure of its members to streamline clinical trial research. 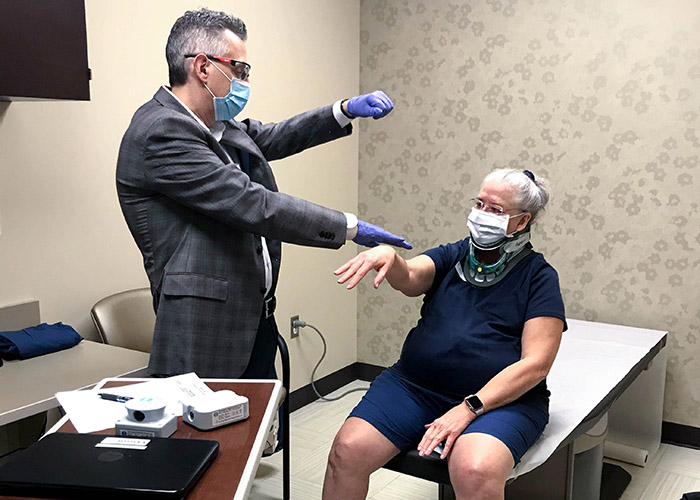 Thousands of rare diseases affect millions of people in the United States, and the road to effective treatments and cures is often slow and bumpy. The Facioscapulohumeral Muscular Dystrophy Clinical Trial Research Network (FSHD CTRN) is trying to change that for people with the progressive muscle-weakening condition.

"The FSHD CTRN is unique for FSHD," Statland said. "There are other rare-disease clinical trial networks, including a program overseen by the National Institutes of Health. Where we're moving into new territory is as we're growing, so are the opportunities to work with industry partners. At the same time, our capacity to work with those industry partners is expanding and so are the services we can offer."

FSHD is a genetic disease that weakens the skeletal muscles. While the condition can spread to any muscle in the body, it generally begins in the early teen years with the face, shoulders, upper arms, legs or core, according to the FSHD Society.

World FSHD Day, annually celebrated on June 20, is one way advocates call attention to the disease that affects an estimated 870,000 people worldwide.

Although there is currently no effective treatment or cure for FSHD, in 2010, scientists discovered its cause - a protein that's not normally expressed in adults is expressed in the muscle and causes damage. The breakthrough led to a new focus on clinical trials exploring potential therapies to combat the life-altering disease.

However, a range of barriers have made it tougher to execute clinical trials and slowing progress. For instance, researchers recognized they couldn't answer some important questions such as how the effectiveness and efficacy of any potential treatments would be measured or how they would measure if a therapy was working. Meanwhile, although there was a lot of strong FSHD research happening, researchers were working independently.

In response, Statland and his mentor, Tawil, established the FSHD CTRN in 2016 to create a powerful consortium dedicated to overcoming some of those barriers. The CTRN is a true collaborative effort across its stakeholders, which include:

"We thought that together we could advance and hasten therapeutic developments by figuring out the best way to design clinical trials while also answering some fundamental and lingering questions about the disease, its genetics and how it progresses in people who are managing the condition," Statland said.

Any member of the FSHD CTRN can propose a study and use the network's already established infrastructure and resources to execute it, allowing researchers to launch trials more quickly for less money.

In only five years, the network that began with four sites has expanded to 18 sites around the world - 12 in the U.S., five in continental Europe and one in the United Kingdom.

To overcome some of the identified barriers and challenges to FSHD research, the network launched ReSolve, currently the largest international natural history study ever conducted on the disease. ReSolve's purpose is to serve as a collection point for information that can be used to help identify the best ways to frame clinical trials. The study, the network's largest with 14 of its sites participating, is following 300 participants for up to two years.

"In ReSolve, we're collecting a variety of data points such as different functional motor skills related to participants' arms and legs, participants' strength and a biomarker related to muscle quality," Statland said. "This study will help us better understand FSHD by answering some fundamental questions such as how the disease affects people over time, if some people progress in predictable ways and if there are clinical features that can help us identify these people. Also, having all that data gathered and outcomes already validated will allow us to move forward much more quickly as clinical trial opportunities come up."

The network also is conducting MOVE, a two-year follow-up study to ReSolve, that includes all 12 U.S. sites. As part of that study, the FSHD CTRN is continuing to collect data to help develop tools for speeding up the development of drug therapies and delivery of care for people with FSHD. Interestingly, MOVE is open to potential research participants who were excluded from ReSolve, such as younger individuals and those who've lost the ability to walk.

Although the network's model is not necessarily unique, one of its strengths and a key to its effectiveness is an insistence on standardization and consistency across sites and studies. All FSHD CTRN site personnel undergo training annually to make sure each one is executing clinical trial protocols the same way. This ensures the data can be pooled and that the data are of high quality.

Another hallmark of the network is its robust engagement with patients and advocacy groups. The FSHD CTRN includes patient representatives on its advisory councils, and it organizes focus groups to make sure the patient perspective is consistently incorporated in its studies and other initiatives. The network's sites also are actively doing outreach in their local communities, educating and raising awareness about research opportunities.

"Our network is meant to be a community resource," Statland said. "There are about 20,000 people in the U.S. with FSHD, but I think we probably only know about several thousand. I'd love to be able to find others, and we're working really hard to reach out to underrepresented and underserved communities to make sure they're educated about the disease, know there are research opportunities and that we're working on treatments to help them."

In a nod to the future, the FSHD CTRN also is designed to be a platform to train the next generation of researchers by giving them chances to step forward and lead meaningful projects.

Statland credits the strong collaboration of the network's stakeholders and the efforts of its dedicated project managers, Kiley Higgs and Michael Walker, for the FSHD CTRN's success. While it has evolved much faster than he anticipated, Statland sees a bright, long-term future for the network, especially with the search for effective treatments now in high gear.

"The ultimate goal of the FSHD CTRN is to bring therapies to patients and make their lives better," he said. "As long as we still need treatments and we still have questions that are unanswered, there a need for this network."

For more information on the network and its research opportunities, visit the FSHD CTRN website.