KU School of Medicine graduates received their medical degrees early so they could provide care in wake of the COVID-19 pandemic. In the weeks between early graduation and their residencies, some helped tired doctors and nurses in Liberal, Kansas, any way they could. 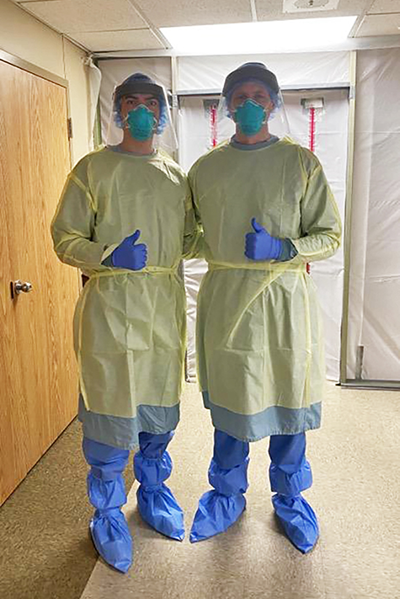 They reached Liberal at the peak of COVID-19 hospitalizations, ready to help tired doctors and nurses in the southwest Kansas city any way they could.

"Given the increased stress on the system and health care workers, this was an opportunity to help in a time of need. This is why we signed up to go into medicine, to help," said Jesse Voth-Gaeddert, M.D., who along with Zack Gaughan, M.D., reported for work at Southwest Medical Center on May 4 for a seven-day stretch.

They, along with fellow KU School of Medicine-Wichita graduate Jermey Bennett, M.D., who worked in Liberal the following week with Kansas City graduate Miranda Machacek, M.D., were among fourth-year students given the opportunity to receive their medical degrees early so they could provide care as the virus put health care systems under pressure.

In Liberal, it turned out that the best way the new doctors could help was to bolster the nursing staff working in the COVID-only unit, consisting of the hospital's eight-bed ICU that at times squeezed in 10 patients. Because patients needed to stay still and couldn't move themselves, they helped reposition patients, to avoid bedsores and other ailments.

"At any given time, half to three-fourths of patients were intubated, needing a ventilator. The ones who weren't needing extra oxygen," Gaughan said. "The drug regimens were pretty much the standard treatment for SARS-CoV-2. The thing that was most different from other times in the ICU is that almost all the patients were on the same regimen."

Seward County, home to Liberal and a meat packing plant, had over 800 virus cases as of May 20 and one death. In addition to local cases, other patients came from around nearby Guymon, Oklahoma, home to another packing plant. With tight quarters and large work forces, packing plants spawned virus clusters.

The day the Wichita grads arrived in Liberal, ready to begin work Monday, May 4, the hospital was in such danger of running out of ventilators that four had to be flown in by military helicopter. So, their timing was good.

Once they were in the unit each day, they were there for the duration. They'd wear double layers of most items - cloth and paper gowns, two sets of gloves, N95 masks and face shields - and enter through a zippered isolation room. After the shifts, they exited through a "dirty" room, shed clothing and immediately headed across the parking lot to their motel rooms to shower.

Gaughan and Voth-Gaeddert helped perform oral care on patients, since they couldn't brush their own teeth, monitored oxygen and checked glucose readings, whatever the tired nurses needed help with. Each day, they would round with the attending physician and his team of two physician assistants.

"It helped me see firsthand how health care workers go about caring for patients with this disease and how hospitals are figuring out how to care for these patients," Voth-Gaeddert said.

"They were constantly thanking us," he said of the medical team. "It illustrated to me how backbreaking the work the ICU nurses were doing was. They were working many days in a row, and their work ethic showed how much they cared about their patients."

The volunteer program was funded by a $1 million gift from the Patterson Family Foundation in Kansas City, Missouri. When announced in early April, the extent the virus would tax hospital and provider resources was difficult to predict. Fortunately, only a few medical centers had to take advantage of the program, where the new doctors worked under special Kansas Board of Healing Arts permits.

Organizers were initially concerned that rural providers - Kansas has 34 counties with just one or two doctors - would be overwhelmed. But as COVID-19 spread in Kansas, only a few rural cities found their local hospitals in danger of being overwhelmed. A total of eight volunteer doctors, including Gaughan, Voth-Gaeddert and Bennett, worked in Liberal, Dodge City and Pittsburg. Three volunteers came from Kansas City and two from Salina. Fourteen others were doing contact tracing in the state.

"Kansas has flattened the curve and the need for volunteers was lower than expected," said Kennedy, who worked on the effort along with fellow Kansas City faculty member John Alley, M.D., FACS, assistant professor of surgery in the General & Pediatric Surgery Division and a major in the Kansas National Guard. "Even though we communicated with many systems, they did not feel overwhelmed in most cases and did not feel a need for volunteers. ... We were fortunate that the program was timed perfectly to match the need that did develop. We don't have any volunteers doing clinical work at this time."

Volunteers received a stipend and were reimbursed for meals and lodging. The program was designed to end June 1, so that if a participant were exposed to the virus, they would have time to quarantine before reporting to residency.

'We could use our knowledge'

Gaughan and Voth-Gaeddert volunteered because they could and there was a need. In mid-June, Gaughan, from Hays, will begin his intern year of a radiology residency at the University of Missouri-Kansas City. Voth-Gaeddert, a native of Hesston, heads to Grand Junction, Colorado, for his family medicine residency.

"Seeing there was a need, we could use our knowledge to help the people of Kansas," said Gaughan, adding that not knowing what they were getting into was itself a learning experience. "Being able to roll with the punches is pretty important. If there's ever a time to have that mindset, the intern year is a great time to have that."

Published with permission from and courtesy of the Public Affairs Office at the University of Kansas School of Medicine-Wichita.