Christopher Crenner, MD, Ph.D., chair of the Department of History and Philosophy of Medicine at the University of Kansas School of Medicine, has been selected for a prestigious award to support historical research in medicine. 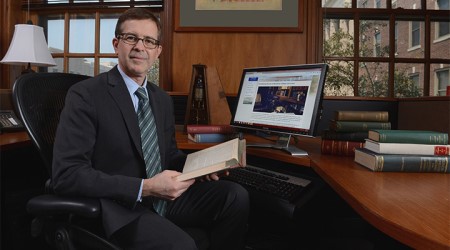 Christopher Crenner will be accessing historical documents from the National Library of Medicine as part of his research. Photo by KU Medical Center Photo Services.

If you had an ulcer in the 1950s and 60s, odds were high that you'd be staring into the business end of a scalpel. During those decades, peptic ulcers - sores in the lining of the stomach and small intestine - were removed in surgery.

But the decades before and after the mid-century had surprisingly few ulcer surgeries. Why? What changed to make this treatment so popular then but so rare now?

Christopher Crenner, MD, Ph.D., chair of the Department of History and Philosophy of Medicine at the University of Kansas School of Medicine, will be investigating this medical mystery.

He has been selected for the Michael E. DeBakey Fellowship, a prestigious award that provides up to $10,000 to support historical research in medicine. His focus will be "Ulcers: The Rise and Decline of a Surgical Disease."

The fellowship is sponsored by the National Library of Medicine, a division of the National Institutes of Health, and funded by a foundation in DeBakey's honor. The foundation's namesake was a renown surgeon, educator and inventor who helped develop the concept of the Mobile Army Surgical Hospital (MASH), pioneered surgical procedures and developed a key component for the heart-lung machine. DeBakey was also passionate about medical history.

"The research that drew me to study the history of ulcers started with some basic questions about the history of surgery. That was also how I became more familiar with the work of Dr. DeBakey," Crenner said. "It was surprising to me to see how much research in surgery in the 1950s and 1960s focused on the problem of peptic ulcers. It was this work that got me started thinking about this striking picture of ‘rise and fall' that we see with the history of ulcer disease in the United States."

Q: What drew you to apply for the DeBakey Fellowship?

A: You can't think about surgical research in this period without learning more about DeBakey and his influence. What I came across the DeBakey Fellowship and the opportunity to work in the nation's greatest collections in the history of medicine - it was an obvious fit for my project.

Q: How did you select your topic, "Ulcers: The Rise and Decline of a Surgical Disease"?

I began this project looking at a single unusual program for ulcer treatment that began in Minnesota in the 1950s, led by America's most prominent surgeon of the day, Dr. Owen Wangensteen. Wangensteen became convinced that by mechanically freezing the lining of the stomach he could cure ulcers and prevent their recurrence.

His colleagues became skeptical of the claims being made for this work. They set up a remarkable series of placebo-controlled trials of Wangesteen's freezing technique, randomly assigning patients with ulcers to either the stomach-freezing procedure or to a fake version of the procedures, designed to be indistinguishable to patients from the real procedure.

Wangensteen's stomach-freezing work came to an abrupt halt when results in the two groups of patients repeatedly came back identical - most of the positive results from freezing seemed to arise from a placebo effect.
Investigation of this fascinating episode led me to the recognition of how important ulcer surgery was in the 1950s - and its role in shaping leading academic surgical programs like Wangensteen's. This work piqued my interest in the strange rise and fall of ulcers as a critical medical condition and a popular touchstone in American public culture.

Q: What is your research plan?

The collections at the National Library of Medicine (NLM) provide unrivaled resources for this research. I plan to examine professional papers from several leading surgeons who helped to lead efforts on ulcer surgery. I am particularly interested in correspondence among the leaders of this field.

In addition, the textbook literature of the period contains a fascinating record of the steadily increasing number of new procedures and modifications of existing surgeries for ulcer disease. The excellent collections of midcentury surgical textbooks at NLM will be a treasure trove for this information.

Q: How will the final product be leveraged?

A: Research on the surgical treatment of ulcers is a key part my larger book project. The book examines the history of peptic ulcer disease over the last century.

Q: What do you enjoy about teaching medical history, and why do you think it's important that future physicians have this understanding of history?

A: it's easier to see where we are going when we can glance back along the path that brought us here. The more specific answer is that I love how students respond when given a chance to step outside of the rapid, high-density information flow of medical education to see how it all fits together.

There are a half-dozen topics in the history of medicine that give them an immediate sense of perspective. Peptic ulcers provide a great example. The diseases that affect us now will change in the future. This is a valuable lesson for students to pick up early in their careers.