The five-year, NIH-funded COMET clinical trial is the largest of its kind to compare aerobic, resistance training or a combination of both while looking at cognition in older adults. 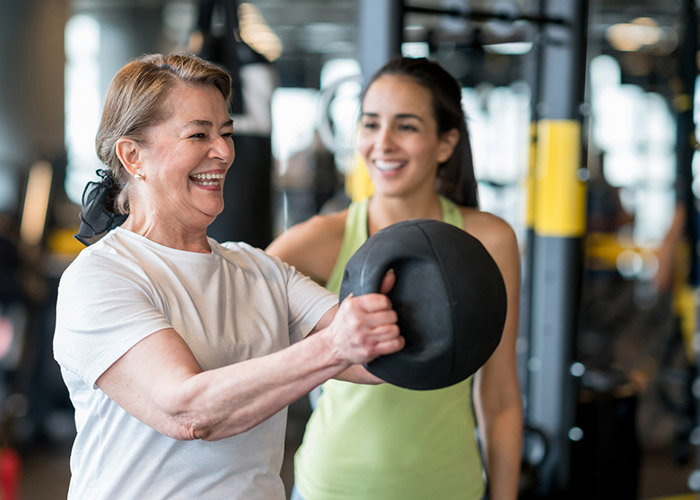 What's the best combination of physical activity to maintain cognition and functional health as we age? The Combined Exercise Trial, or COMET, is a clinical trial aiming to find the best approach.

With exercise a well-touted key to a healthy lifestyle, seniors have long been lacing up their sneakers and carving out time to get their hearts pumping while adding in some critical resistance training.

The U.S. Centers for Disease Control and Prevention encourages older adults to aim for at least 150 minutes of moderate-intensity aerobic activity each week along with at least two days of resistance training.

But is that the right mix of physical activity, or is there a different combination that will better help older adults maintain their cognition and functional health as they age? That’s what researchers at the University of Kansas Alzheimer’s Disease Research Center (KU ADRC) and the KU Center for Physical Activity and Weight Management (CPAWM) want to find out in the Combined Exercise Trial, or COMET study.

Researchers are seeking 280 people, ages 65 to 80, to participate in the five-year clinical trial funded by the National Institutes of Health.

“What makes COMET different from other exercise trials we’ve done in the past is we haven’t previously examined resistance training. With the exception of a small pilot that was done several years ago, we have focused primarily on aerobic activity,” said Amanda Szabo-Reed, Ph.D., research assistant professor in the Department of Internal Medicine and the KU Center for Physical Activity and Weight Management. Szabo-Reed serves as a co-principal investigator on the study along with Eric Vidoni, PT, Ph.D., an associate professor at the KU ADRC.

“Hopefully we find that following the public health guidelines of a combination of aerobic and resistance activity is superior to just doing one--either aerobic or resistance training alone--not only for the brain but also functionally for older adults,” she said.

Details of the study

Participants in the study will be randomly divided into four equally numbered groups and asked to exercise under the guidance of a personal trainer for one year. One group will do 150 minutes of aerobic activity each week, while a second group will do two resistance training sessions weekly. A third group will perform 150 minutes of aerobic activity, plus two days of resistance training each week, and the fourth group will engage in only flexibility and stretching activities.

Participation in the study includes a paid gym membership. Most exercise sessions will take place at a YMCA location, where local COVID-19 safety and health guidelines will be followed.

While there is a lot of research pointing to the benefits of exercise, including that physical activity is good for the brain and that it can help slow or prevent the aging process, Szabo-Reed said one of the goals of COMET is to learn if there’s a specific type or combination of exercise that’s superior in benefitting older adults’ brain health.

For more information about the COMET study or to enroll in the trial, call 913-588-0555, email kuadrc@kumc.edu or visit the KU ADRC website.