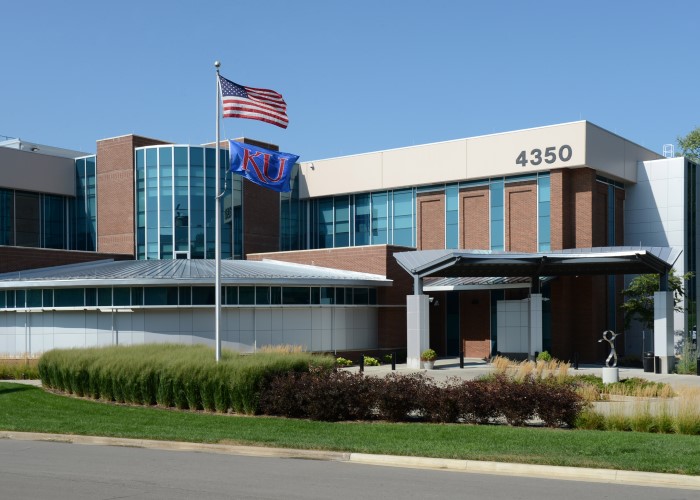 The University of Kansas Clinical Research Center is celebrating its 10th anniversary. The site on Shawnee Mission Parkway in northeast Johnson County gives researchers a centralized location for clinical-trial research and resources that streamline the startup of those trials.

Ten years ago, on Jan. 23, 2012, the brand-new University of Kansas Clinical Research Center opened its doors. The facility at 4350 Shawnee Mission Parkway in Fairway, Kansas, looked like a building in a suburban office park, not a place where science could change lives.

But looks can be deceiving. Just a week later, on Jan. 30, 2012, a group of VIPs strolled through the laboratories dedicated exclusively to clinical-trial testing. They were invited into the spacious rooms designed for clinical-trial participants to meet with researchers. In touring the 82,400-square-foot facility, the group saw where the University of Kansas Medical Center was going to tackle solutions to some of the world’s toughest health concerns.

About the KU CRC

Three different entities within KU Medical Center have space in the facility:

Hope Krebill, executive director of the Masonic Cancer Alliance, said the KU CRC has been an excellent hub from which patient research advocates, hospitals, providers and researchers throughout Kansas and western Missouri are connected to the work of the KU Cancer Center. “The MCA is focused on fostering collaboration in cancer research, education and survivorship. To have our offices in the same building as ongoing clinical trials enhances that collaboration.”

Tara Lin, M.D., medical director of the KU Cancer Center Clinical Trials Office, said cancer center researchers have enrolled more than 700 clinical trial participants for Phase 1 cancer studies during the most recent five years of the research center — a threefold increase over enrollment in the first five years.  “That’s a tremendous impact for our patients across Kansas and Missouri and beyond,” Lin said.

Jeffrey Burns, M.D, co-director of the KU Alzheimer’s Disease Research Center (KU ADRC), said moving into the KU CRC 10 years ago was “transformative.” “The CRC gave us space to really create and grow these young programs. And now we have this incredibly unique set of programs that work together to provide scientists with amazing tools,” he said.

Why it’s in Johnson County

Located in northeastern Johnson County, the KU CRC is supported in part by a 1/8-cent sales tax on purchases within Johnson County. In 2008, voters in the county passed an initiative that created the Johnson County Education Research Triangle (JCERT) as an investment into higher education and economic growth within the county.

The ongoing tax now generates more than $20 million a year, and that money is split evenly between the three sides of the “triangle” referred to in JCERT’s name. They are: 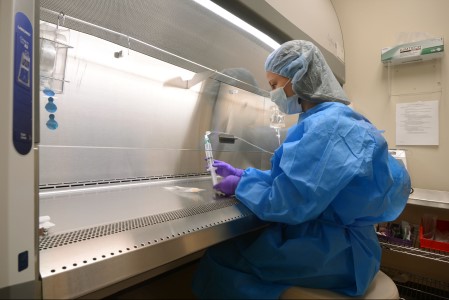 National Cancer Institute. Roy Jensen, M.D., vice chancellor and director of KU Cancer Center, said he knew that a first-class cancer research facility was needed to achieve the coveted NCI designation. To that end, he spoke at countless business meetings and civic events to build voter support for JCERT. KU Cancer Center received that NCI designation the same year the KU CRC opened – 2012 – and earned a renewal in 2017. It is one of 71 NCI-designated cancer centers in the U.S.

“When I talk about JCERT to other cancer center directors across the country, they're absolutely dumbfounded that one, we even had this idea, two, that it's wildly successful,” Jensen said in a recent Bench to Bedside episode that celebrated the 10th anniversary of the historic vote.

Mary Birch, chair of the KU Cancer Center Funding Partners Board and one of the originators of the JCERT initiative, said in the same episode that funds from JCERT are ahead of expectations. Each “point” of the JCERT triangle started receiving $5 million and are now getting closer to $7 million a year because of increases in the collected tax. “Johnson County’s thinking was bold and dreaming and visionary,” Birch said.

"The CRC gave us space to really create and grow these young programs. And now we have this incredibly unique set of programs that work together to provide scientists with amazing tools."
- Jeffrey Burns, M.D., co-director of the KU Alzheimer’s Disease Research Center

Before the KU CRC opened in 2012, researchers had no dedicated building for clinical trials. Like many academic medical centers, space was at a premium. The Kansas City Star quoted a physician saying the former space was “down in the bowels of the hospital, where patient research centers typically are at older hospitals.”

Without a dedicated space, opportunities for researchers to earn grants were limited, and pharmaceutical companies were less likely to take a chance on collaborating with a researcher lacking proper facilities.

Finding a cancer-fighting clinical trial close to Kansas City was tough. “I’d have a patient come and I thought they needed something that was new or cutting-edge…you would have the conversation, ‘Do you have any cousins on the East Coast?’... because there was no option then within a reasonable distance for people who lived in the middle of the country,” Lin said.

Creating a place of excellence

The KU CRC building was initially donated by the Hall Family as part of an $18 million gift to the University of Kansas Cancer Center. An extensive remodeling cost $19 million and was funded by sales-tax revenue. “Once the tax passed, we went through an incredible due diligence process in terms of going and visiting the best Phase 1 facilities across the country, getting their expertise and asking how to design the facility,” Jensen said. “We were able to benefit from all that advice.”

Lin said of the building, “When people come in, their jaws drop that we have a dedicated Phase 1 unit. It’s not in the corner of some floor in a non-used building. We have pharmacists, nurses, lab staff, and research staff exclusively dedicated to early phase research — this initiative is really something else. And the fact that we've been able to treat so many cancer patients over this time period and to be able to keep them at home, I think is really the most important piece of it.”

Mario Castro, M.D., MPH, director of the Frontiers Clinical and Translational Science Institute at the University of Kansas, said the building is a great home for translational science, too. Researchers can conduct clinical trials using the latest techniques while involving a diverse population of participants.

“Without the CRC, conducting clinical trials would be difficult and time-consuming for investigators to start up a trial. The CRC makes this process efficient and possible for all investigators,” Castro said.

Burns said KU ADRC researchers have been able to dramatically increase their number of studies as well as their funding from the National Institutes of Health because of the synergy that the KU CRC creates. He said, “I can honestly say that it wouldn’t have happened without the superb resources of the Clinical Research Center.”

Above right photo: Cancer clinical trials are conducted at the KU CRC, and the facility has helped The University of Kansas Cancer Center triple its early investigations of cancer treatments.