The program offered participants a retrospective look at the initiative and discussed the current state of cancer research, treatment and prevention. 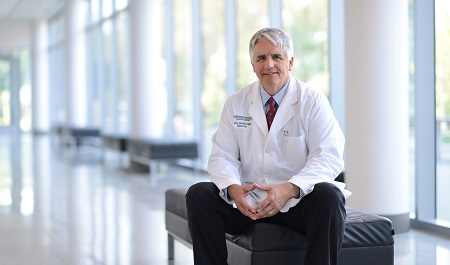 Five years ago, a bold new $1.8 billion federal initiative called the Cancer Moonshot set out to increase the number of new cancer therapies and improve cancer prevention. On May 6, 2021, three national cancer experts joined a virtual panel discussion to talk about the Cancer Moonshot, including Roy Jensen, M.D., director of The University of Kansas Cancer Center.

The presentation, streamed live and moderated by a correspondent from The New York Times, brought together Jensen; Siddhartha Mukherjee, M.D., author of The Emperor of All Maladies: A Biography of Cancer, which won the 2011 Pulitzer Prize in general nonfiction; and Dinah Singer, Ph.D., deputy director for scientific strategy and development at the National Cancer Institute (NCI).

The program, Cancer Moonshot: The Search for Cure, was offered free to the public by the Linda Hall Library in Kansas City, Mo. Participants took a retrospective look at the initiative and discussed the current state of cancer research, treatment and prevention.

Below are some excerpts from the discussion, edited for length and clarity.

Tell us a little about how you think the Cancer Moonshot is going and what we have learned.

Jensen: The Moonshot program, and the Blue Ribbon Panel [who guide the program] specifically, had a pretty tough task because cancer is an extraordinarily multi-dimensional, complex problem. They could have said, "we want to cure tuberculosis." And tuberculosis, everybody will agree, is one disease. It has many different manifestations, but it's one disease. The more we're finding out about cancer, it's almost as if every single patient has a distinct disease. That's certainly true at a genomic level.

There are also some problems, which seemingly are relatively simple; for example we know that cigarette smoking causes cancer, yet in some areas of the country, anywhere from 15 to 25%, of the adult population smokes. It's frustrating, frankly, that the entity that causes probably 85% of all lung cancers is still a wildly popular behavior. And so it makes it even more difficult. When we're able to identify the cause we're able to develop effective treatments. And yet the science, the medical knowledge, is ignored and not fully utilized.

Singer: We've made major advances in new approaches to immunotherapy, both in children and in adults, and in the kinds of cells-CAR T-cells, which are the immunotherapy component that we treat patients with--how we treat them and the targets that we use.

Another big challenge is understanding how a tumor progresses. If we identify a pre-cancer, to a tumor, to a resistant tumor, to metastasis, can we predict that trajectory? We've made major progress in charting out that path and now modeling it so that we might be able to intercede.

We have a lot of good prevention strategies. Colorectal cancer screening is one. But often it doesn't get to underserved or rural populations. We have a couple of programs looking into how do reach those populations, not just for the primary screening, but for the referral to care if something is detected.

What are the differences between cancers that make it hard to treat this as one disease?

Mukherjee: It's a question we still fully don't know the answer to. We know at a genetic level, cancers are different, because every cell has many different brakes and many different accelerators. In a given cancer, you can have one combination of brakes that are snapped, and one combination of accelerators that are jammed. Any of these combinations in various permutations can cause the cancer cell to divide abnormally. That's one major genetic-level difference.

And finally, cancers are different from each other because of the stage we find them in. And then there's the timing: how quickly the cancer is moving and how it's interacting with the rest of the body.

Should we not be using the term cancer as if it's a singular noun? Should we be saying cancers? Or do we need some better overall word for this series of diseases?

Singer: I think the word cancer is useful because there is a commonality, that all cancer cells have uncontrolled cell division. Perhaps a concept we have to talk about is moving from thinking about cancer as a lethal disease to thinking about it as a chronic disease. I think that's the goal, to change how we view cancer, that it's not necessarily the death sentence that people have thought of it up until now. We really have many therapies that now allow it to be a chronic disease.

Can you give us a sense of how are we doing historically? When you sort of look across the spectrum of different types of cancer, how much better have we gotten? And what are some of the major holes that remain?

Jensen: Cancer in many ways is becoming a disease of disparities. We're looking at a situation where because of poor socioeconomic status, or diet, obesity, excess smoking rates, cancer is increasingly becoming a disease of disadvantaged populations. And it's having a devastating effect. In fact, it was one of the lessons that we learned with COVID-19. In terms of disadvantaged populations, we were there with cancer a couple of decades before we had COVID-19. Those socio-economic situations are taking a devastating toll on our population every single year.

Singer: I think we have to separate the research component from the implementation components. What do I mean by implementation? We have a lot of prevention strategies. The HPV vaccine is one, preventing obesity and stopping smoking are others. We know they work, but we haven't learned yet how to implement what we know in the general population. A major effort within the Cancer Moonshot and within NCI, is understanding the science behind how you implement. How do you change behavior? How do you get people to actually follow up on what we know works?

The other piece is the research. In the case of the HPV vaccine, part of the problem originally was that people needed first three boosters and then two. And it was very hard to get people back for their second and third shots, as we're learning with COVID-19 as well. What NCI has been doing is looking to see, can you get effective protection with just one shot of the HPV vaccine? That would then allow us to reach a broader population.

Jensen: In 1900, the largest source of cancer deaths in the United States was cervical cancer. That continued largely unabated. There was obviously the rise of lung cancer with cigarette smoking, but cervical cancer was our biggest issue in the first half of the 20th century. What changed? The implementation of a very simple and widely adopted screening tool. Pap smears drove down cancer deaths from cervical cancer to around 10,000 cases, and it had been the leading cause of cancer death.
And you contrast that very successful--I might even argue, most successful public health measure of the 20th century other than maybe the Surgeon General's report--with the implementation of the HPV vaccine in the United States, which has only been a modest success at best. It clearly doesn't have to be that way. You simply have to look at Australia, which is a country that would seem to be a reasonable comparison to us. And they're on track to potentially eliminate, for all intents and purposes, cervical cancer by 2030 because their HPV vaccination is widely and very successfully implemented. Here, it's been kind of a spotty success.

Are there things you've learned from your work trying to fight cancer that have been helpful or could be helpful in thinking about how we ought to combat COVID-19?

Jensen: The National Cancer Institute has played a very important role in the fight against COVID-19. The NCI diverted a significant number of resources. Cancer centers across the country devoted a significant number of resources. Our cancer center's clinical trials office basically served as the nidus for all the COVID-19 trials at our medical center. We provided the infrastructure, the manpower, the expertise around that. And we have repurposed drugs that we're looking to improve the therapeutic outcomes of COVID-19.

So, I think there are many, many lessons we've learned from cancer. In fact, everything from vaccine strategies to understanding signaling pathways and cells that are critical for viral pathogenesis. Nearly all of that can be traced right back to fundamental knowledge that was discovered in the cancer research.