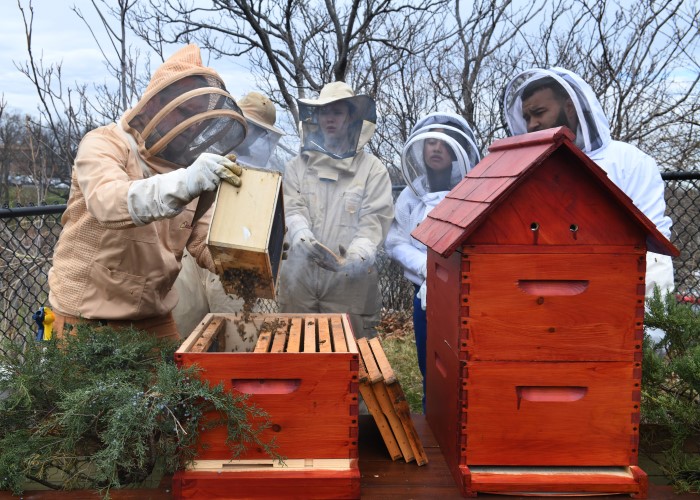 These two hives, located n the greenspace north of the Health Education building, will be the new home for bees from an apiary in Georgia. A total of 70,000 bees in seven hives is expected to expand to more than 400,000 bees this summer before the number lowers again in the fall, according to bee expert David Friesen.

Into a square hive he dropped the queen, protected in a waxen sheath, and then shook loose a cascade of 10,000 cold bees into their new residence.

These bees are part of a project that brought a total of 70,000 bees from an apiary in Georgia to populate seven beehives in four locations on campus. Friesen, the founder of a new nonprofit called Bee KC, contacted the University of Kansas Medical Center Botanic Gardens in hopes of setting up the hives.

Why bring bees to campus?

Eric Tow, manager of landscape operations for the medical center, said they were “thrilled” to receive Friesen’s request. “It seemed almost too good to be true,” Tow said. “We started a pollinator garden three years ago in our Botanic Gardens. And we were trying to educate and emphasize the need for pollinators in this area.”

And bees are great pollinators, Friesen said. “Bees pollinate essentially one-third of everything we eat. So, one in three bites of your food is thanks to honeybees.” 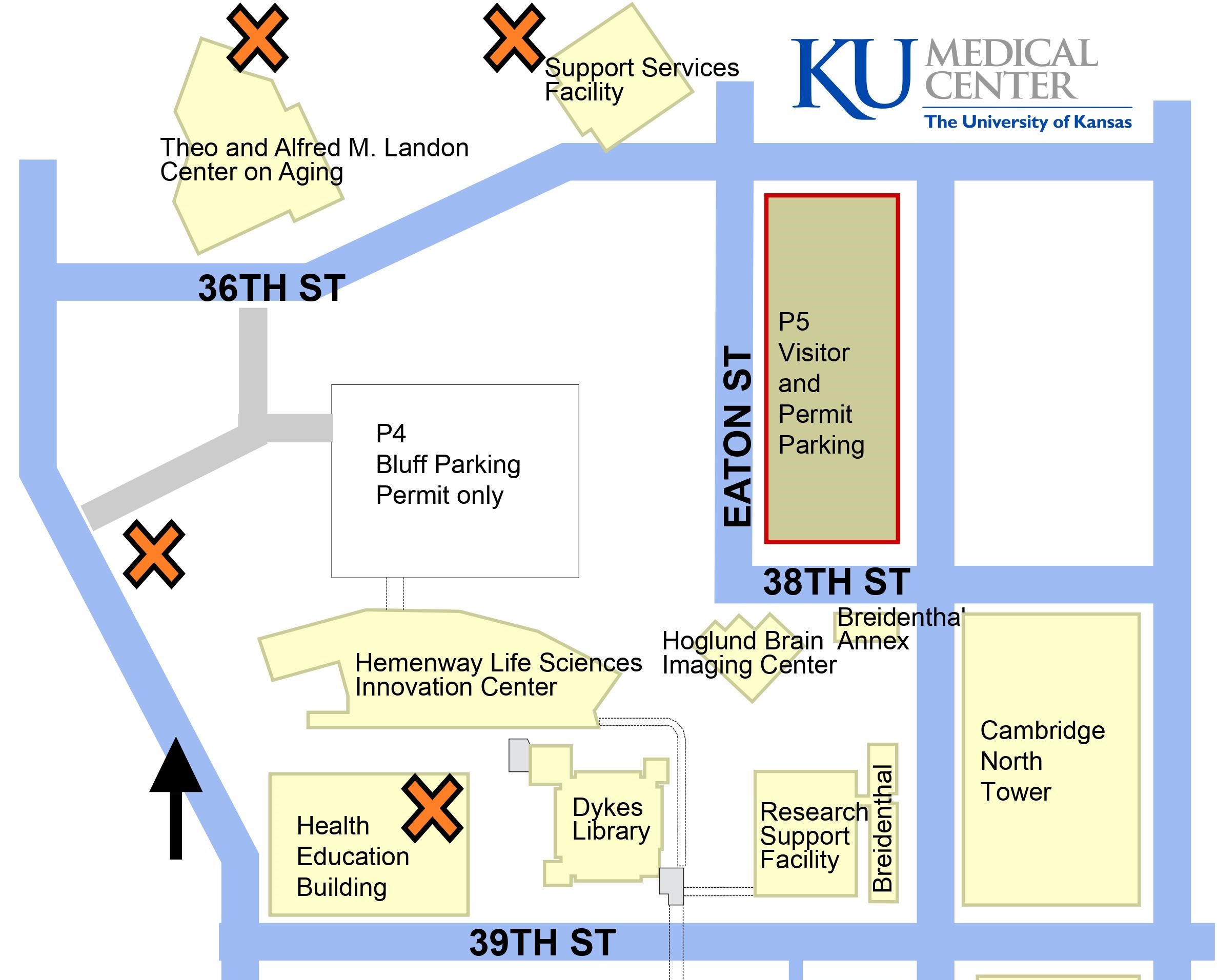 That statistic becomes especially important as the medical center plans to increase production in its on-campus garden. “There’s a food insecurity problem within the students, so one of the student leaders came to us and asked what we could do. Since we were growing some vegetables on campus, we decided to grow a garden.”

In its first year of production three years ago, the on-campus garden produced about 1,500 pounds of produce for the Thrive Food Pantry. This year, with the help of a high tunnel – a plastic-covered hoop that protects the plants inside – gardeners plan to deliver five times the amount of produce to those who need it.

The bees will play an integral part in that garden and the others in and around KU Medical Center, Friesen explained. “Bees really help the entire ecosystem, especially in a city. Put bees in your garden, and you’ll really start to see your garden thrive,” he said.

What if you’re allergic to bee stings?

Friesen said people usually have one of two main reactions to bees: either they love the idea of having bees nearby to sustain an ecosystem, or they want to get as far away from bees as possible to ward off stings.

For those with bee-sting allergies, keeping a distance from bees is important. Those who are allergic could have serious complications or even die from a condition known as anaphylactic shock. For them, and for anyone who equates the buzz of a bee with potential pain, Friesen noted these precautions: 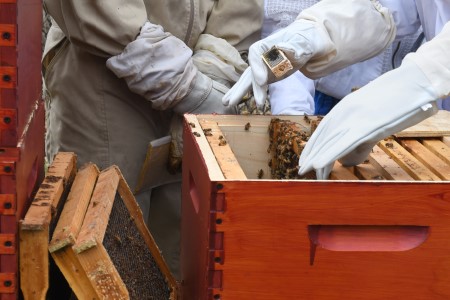 Twenty or so people gathered around Friesen for that bee transfer and tutorial on March 25. One of them was Mikayla Kwek, a student in KU School of Nursing. She stopped by after class to see the bee installation. She even donned a protective bee suit so she could see the hives up close.

“I thought it would be fun to see the bees,” she said. “And I think it will be really nice to have them on campus.”

Top: A map shows the four sites where hives were installed. Above: The hives provide enough space for the colony to expand over the summer. Photos by Elissa Monroe, KU Medical Center Photo Services