Kendra Gagnon, now the founding director of a program at Johns Hopkins, urged students to take risks during the Jessie M. Ball Lecture and Pinning Ceremony. 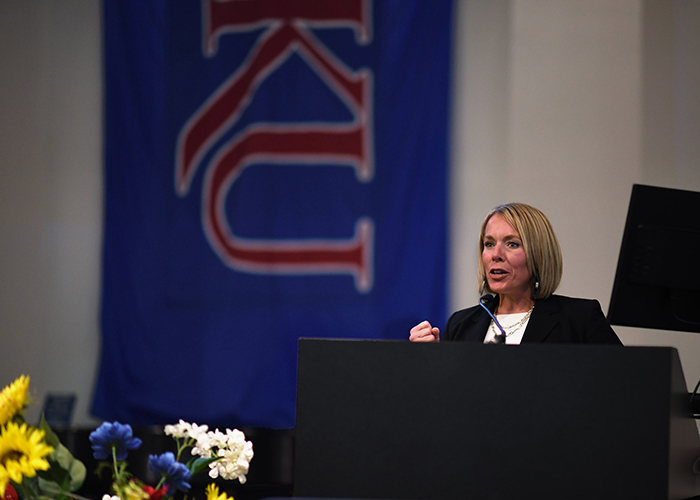 For the first time since 2019, students and their guests could gather to celebrate an important milestone in the Department of Physical Therapy, Rehabilitation Science and Athletic Training.

The department, one of eight in the University of Kansas School of Health Professions, combines an inspirational lecture with a pinning ceremony for its incoming graduate students.

Members of the Class of 2025 in the three-year Doctor of Physical Therapy program (DPT) and the Class of 2024 in the two-year Master of Science in Athletic Training program (MSAT) recited an oath and received a pin as a symbol of their course of study.

Delivering this year’s speech was Kendra Gagnon, Ph.D., who received her doctoral degree in rehabilitation science from KU Medical Center in 2009. She is also a former faculty member of KU Medical Center, having worked as a clinical assistant professor from 2008 until 2014.

Before the speech, Gagnon said she felt like she was “coming home.”

“I often say I was ‘brought up’ at KU Medical Center,” she said. “It’s where I learned to be a scholar, a researcher, teacher and academician.”

In her speech, Gagnon used the metaphor of jumping into a cold pool as a way to assess risks in life. It was a concept she borrowed from a podcast with Reese Witherspoon, Gagnon said, quoting the Legally Blonde star when she said, “Once you get in there, it’s never as cold as you thought it was going to be.”

She then offered an example from her own life. When she decided she wanted to teach, she sent her résumé to KU Medical Center for an open position despite being quite young and without a doctoral degree. But in sending her résumé she met faculty of the physical therapy department who guided her on a course to get her doctorate, and she ultimately landed a faculty position later.

“If I had thought for a moment, ‘Oh, maybe I shouldn’t send my  résumé, then I might not be here today,” she said.

Gagnon is currently the founding director of the DPT program at the Johns Hopkins University School of Medicine in Baltimore, Maryland, with a special emphasis on onsite and online combinations of classes also known as hybrid programming.

“We’re really excited to be embracing innovations in teaching and learning to develop a hybrid DPT program at Johns Hopkins. The landscape of health care and education has changed rapidly over the last few years. Remote work and teaching and learning have taken off,” Gagnon explained in an interview before the speech. “Telehealth has exploded, and the concept of brick-and-mortar education and health care — really, the whole meaning of ‘place’ — has shifted.”

The lecture is named after former physical therapy faculty member Jessie M. Ball, who taught at KU Medical Center from 1960 to 1988. Patricia Kluding, Ph.D., chair of the Department of Physical Therapy, Rehabilitation Science and Athletic Training, paid homage to the former educator.

“As you maybe can tell from her picture, (Jessie Ball) was a very stern woman with very high expectations,” Kluding said.

Blake Miles, a DPT student who heard the lecture given to honor Ball’s name, said he really appreciated how Gagnon used her own life stories to share a powerful message.

Izzy Rodrequez, also a Class of 2025 DPT student, said, “This was a great opportunity to see the staff and faculty we will get to know in the next three years.”