Researchers from KU Medical Center and the University of Minnesota found that patients may not be benefiting as much as they should from competition between producers of the generic drug, entecavir. 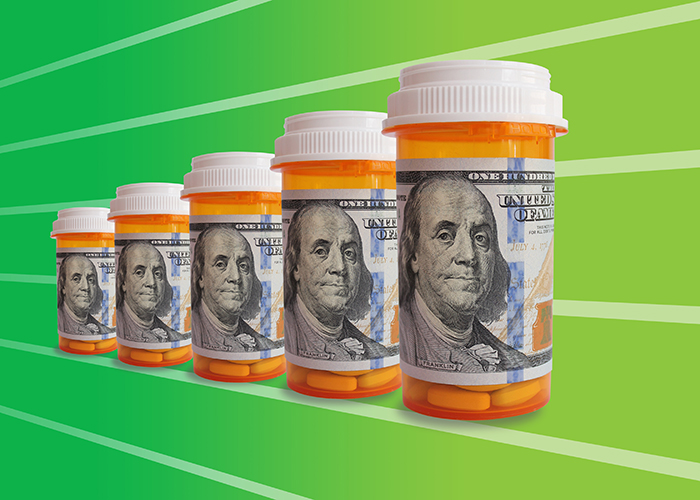 From 2014 and 2018, the number of entecavir manufacturers increased from 1 to 11, and the cost that pharmacies pay for a 0.5 mg entecavir tablet plummeted from $30.12 to $1.93. Meanwhile, the average wholesale price, which approximates the cost to consumers, remained constant at $44.43.

Most consumers of prescription drugs in the United States know the drill: They’ll likely have to pay top-dollar for a brand-name drug until the generic version comes along and the competition among companies producing those generics drives down the price.

Except when it doesn’t. Or at least, except when the price for a generic drug declines for the pharmacies and suppliers who buy them, but somehow not for the patients who need them. According to a study published in JAMA Network Open, this is exactly the case with entecavir, a generic antiviral tablet that is prescribed to treat chronic hepatitis B. The study showed that despite a sharp reduction in the price for pharmacies, the out-of-pocket cost of entecavir actually increased from 2014 to 2018 for privately insured patients.

“We're all told generic competition will drop prices for drugs, and patients will benefit. But that's absolutely not happening [with this drug],” said Nathan C. Bahr, M.D., associate professor in the Division of Infectious Diseases at the University of Kansas Medical Center and an author on the study.

A financial barrier for some people at high risk

Hepatitis B, a viral liver infection that causes fatigue, stomach pain, nausea and jaundice, is spread largely through bodily fluids. The disease is especially an issue in immigrant populations in Kansas City and elsewhere in the state, including people from southeast Asia and sub-Saharan Africa who might not have had access to the hepatitis B vaccination at birth. For many people, the illness is short-lived, but for others, hepatitis B can become a long-term chronic infection that leads to cirrhosis or liver cancer.

When treatment is needed, it is important to administer medications as soon as possible so that it does not progress to those life-threatening conditions. “The problem with this sort of [pricing] situation is that it basically takes that option away for some people at very high risk to develop cirrhosis,” said Bahr.

Bahr began to realize that there was a financial barrier to the drug when, even after generic forms of entecavir became available in 2014, he noticed that some patients with chronic hepatis B were having trouble paying for it. Bahr reached out to colleagues he knew at the University of Minnesota, including Jonathan Alpern, M.D., who researches generic prescription drug costs, as well as the Centers for Disease Control and Prevention. Physicians at the University of Minnesota, it turned out, were also seeing hepatitis B patients faced with the high cost of the generic entecavir.

Working together, the researchers decided to dig deep to find out why the drug cost was still so burdensome for patients. They used the U.S. Food and Drug Administration Orange Book to track the number of manufacturers of the generic entecavir. They looked at trends in the average price pharmacies pay for the drug by using Medicaid’s national average drug acquisition cost (NADAC) database.  They calculated the list price for the drug, average wholesale price, upon which consumer drug costs are often based, and spending by using a commercial drug-pricing database. They then applied [prescription] fill data to calculate out-of-pocket spending trends.

They found that from 2014 and 2018, the number of entecavir manufacturers increased from 1 to 11, and the cost that pharmacies pay for a 0.5 mg entecavir tablet plummeted from $30.12 to $1.93. Meanwhile, the average wholesale price, which approximates the cost to consumers, remained constant at $44.43. For commercially insured people, the average out-of-pocket spending for a 30-day supply of generic entecavir increased from $41 in 2014 to $52 in 2018.

People in high-deductible health plans saw their average out-of-pocket expenditures for a 30-day supply of generic entecavir rise from $103 to $133 across those four years. That increase has been associated with a higher than 50% rate of prescription abandonment, a potentially dire consequence for these patients.

An example of a broader problem

The study did not attempt to unearth the reasons that savings have not been passed on to consumers for this particular drug. “But we think it has to do with the list price staying inflated despite a competitive market, causing patients to be shielded from the benefits of generic competition,” said Alpern, lead author on the study.

Bahr and Alpern believe that entecavir is not the only drug whose generic form has not realized the reduction in cost for consumers, where despite competition in the market, the AWP hasn’t budged—benefitting many supply chain entities, such as pharmaceutical benefits managers, but not patients. Prices for some medications for cancer, autoimmune disorders and mental health disorders have also remained artificially high, Bahr said.

“This is a broad problem. It is probably really impactful for our country as a whole, and we don't think a lot of people are aware of it,” said Bahr. “We hope entecavir is an example that will get other people—patients, physicians, politicians—thinking about it, because it's really a huge issue.”