Dr. Prachee Avasthi, assistant professor of cell biology, and her team have published four scholarly articles on actin protein and how it affects cell cilia. This basic science may help with disease research in the future. 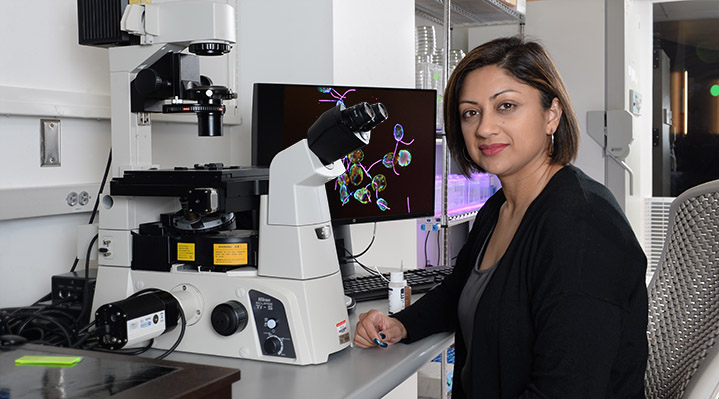 Researcher Prachee Avasthi studies single-cell alga. She and her team have been growing a mutant variety so they can better understand the cell's actin. Photos by Elissa Monroe, KU Medical Center.

Outside a plastic petri dish, alga looks like green goo. Biological ooze. It reminds you why you need to shower after swimming.

Inside the petri dish, however, alga is a rock star with multiple platinum records. That's how important algae is to basic scientific research. Algae has a bigger-than-life role on the scientific stage because it is life. It stands in for cells of the human body in experiments that ask some of life's big questions.

So when Prachee Avasthi, Ph.D., and her team of researchers at the University of Kansas Medical Center shared information on one previously difficult-to-see part of an algal cell called actin, it flung open doors for scientific discovery. It also led to the group publishing four scholarly articles.

One protein, many discoveries

In 2016 Avasthi, assistant professor of anatomy and cell biology in the KU School of Medicine, received a unique specimen from a colleague.

It was Chlamydomonas reinhardtii, a one-celled alga often used in research to study many cell behaviors such as photosynthesis, biofuel production and the evolution of single-celled organisms into multicellular ones.

This particular variety of algae, however, contained a mutation.That mutation made it possible for Avasthi and her team to find, document and test the function of one part of algal cell others knew existed but had been difficult to study. That once-elusive part, called actin, has long been known to play important roles in the cell.

In fact, a major part of the work in Avasthi's lab reflects one amazing point: cilia, the antenna-like projections that grow on the outside of cell, need actin to form. By leveraging this new information, cellular biologists around the world can delve into multitudes of diseases and genetic abnormalities caused by defective antennae.

Avasthi and her team study alga because its cell has the same components as a cell from the human body. Whatever they discover in the green flora is frequently replicated in our own cells, so unlocking the parts of an alga also could unlock mysteries within evolution, genetics and medicine.

"The important thing is that it's really, really well-conserved throughout the tree of life, so that means we can use a simple organism that has one of these antennae to learn more about it."

The cilia on the algae Chlamydomonas reinhardtii look like two antennae on an ant's head. They stick out from the cell not too far apart from each other, and the cell needs the cilia to move around. They're formed from a collection of straw-like structures of proteins called microtubules that also comprise the structure, or "skeleton" of the cell.

In addition to microtubules, an alga cell's skeleton also contains actin. Actin proteins join end to end in a strand - a microfilament - like tightly strung pearls.

Scientists knew that this type of algae had two types of actin, but they knew little about what it did in the cell. Then came the mutant specimen in 2016, which allowed the second actin to be studied.

This mutant in the second, lesser-known actin helped to prove that actin in these algae was more important than researchers once guessed, Avasthi said, because it helped identify all the ways actins affected the growth of the cilia.

"What we now know is that the cell needs at least one of its actins to build microtubule-based antenna. ... We knew earlier there was a role for actin in this building process, but it wasn't clear what specifically that was," Avasthi said.

In the first scholarly article, published in the journal "Cell Reports," the team outlined a redundancy that exists in actins. In other words, if scientists disrupt the work of either actin, the cilia can overcome the problems in making and transporting building blocks and form antennae as usual. However, disrupt both, and the cilia don't form correctly or work right.

Knowing the ways in which the cell builds its cilia will come in handy in genetic research of diseases where the cilia are already imperfect.

"These cilia or ‘antennae' have many different functions depending on the cell's purpose. and if we understand how they're built, we can better study how to fix them when they're broken in all those diseases," she said.

Article three explained the protocol for finding the once-hidden actin, a sort of combination treasure map/user manual for other scientists to find the actin and use it in their own experiments. This publication was accepted in the journal "Bio-Protocol."

Article two expanded on the findings of the "Cell Reports" article. Because it's hard to study what you can't see, this article, published in "Molecular Biology of the Cell," included strong, labeled visual imagery of the elusive actin.

A fourth article, a collaboration with colleagues at the University of Chicago, also accepted to "Molecular Biology of the Cell," asks how the actin strands, particularly in one specific structure, are built in algae at the right time and place.

In summary, the articles form a body of work that relay (in nonscientific terms, and in this order):

In a laboratory on the second floor of the Hemenway Life Sciences Innovation Center, an amethyst glow permeates the fluorescence during the day, and at night, the purplish light escapes through the windows. Avasthi said drivers along Southwest Trafficway can see it, if the night is clear and they're looking for it.

What they may not know, however, are the millions of algae cells depending on that light to grow, and the scientists lining up to transport them from their fake sun to their new purpose under the microscope.

Brittany Jack, graduate student in anatomy and cell biology, has been part of Avasthi's lab since 2016, when the mutant Chlamydomonas reinhardtii first appeared. She was an undergraduate, fulfilling her internship requirement as a research assistant. Now, as a National Science Foundation graduate research fellow, she's earning Avasthi's accolades for the "beautiful data" coming out of the lab.

"She's been in the lab for some time, and she's just outstanding," Avasthi said. "She has had incredible perseverance in getting things to work, and she, along with the whole team, was a cornerstone to the paper."

Jack said she reads scientific information in the morning and then conducts experiments on the algae in the afternoon. Experiments take five to eight hours, she said, so she'll analyze the data that day or the next. The four papers are just the beginning of the research on the actin within algae now continuing in the lab.

"I love this research," Jack said. "We get to answer biological questions, and with those biological answers, we get to eventually help people with what we're finding."

Graduate students Brittany Jack (seated) and Brae Bigge contributed to the actin research.
Avasthi holds a close-up of one of the petri dishes used to grow algae, which is essential in her research.
The cilia on the algae Chlamydomonas reinhardtii look like two antennae on an ant's head. They stick out from the cell not too far apart from each other, and the cell needs the cilia to move around.
See Related Stories in Research, School of Medicine
Newsroom Contact