Professors from schools of Health Professions and Medicine connect a local elementary school with a bicycling nonprofit in a push for lifelong activity. 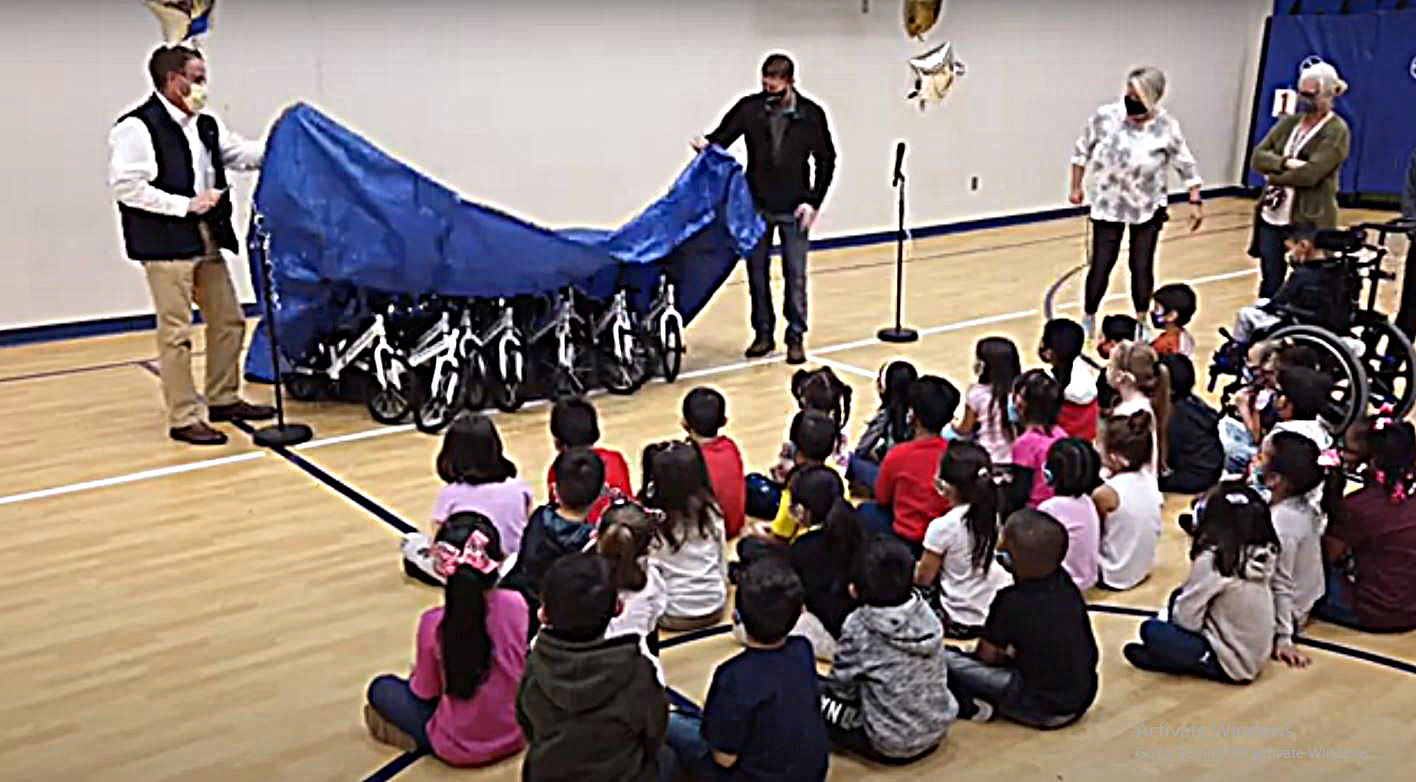 Matthew Sharpe, M.D., left, and Dave Burnett, Ph.D., unveil the All Kids Bike cycles they secured and then put together with the help of School of Health Professions students. The bikes will now be a part of the physical education curriculum for kindergarteners and first graders at Frank Rushton Elementary School in Kansas City, Kansas.

Kindergarteners at Frank Rushton Elementary School gasped and shrieked with excitement when they saw a classroom set of bicycles just their size during physical education class.

The bikes, unveiled in the fall of 2021, were part of an outreach program initiated by Dave Burnett, Ph.D., associate professor and chair of the Department of Respiratory Care and Diagnostic Science in the University of Kansas School of Health Professions.

Burnett, an avid cyclist himself, saw a story about the All Kids Bike program in one of his mountain-biking magazines. All Kids Bike is a nonprofit organization dedicated to helping all children, regardless of their socioeconomic status, learn to ride a bike. By supplying the bicycles and curriculum via donations and grants, All Kids Bike helps make bicycling part of the physical education curriculum.

Burnett, who is also associate dean of faculty practice and community partnership for the School of Health Professions, did some investigating. He then persuaded his friend and colleague Matthew Sharpe to help bring All Kids Bike to Rushton, an elementary school just a half-mile southwest of the KU Medical Center campus in Kansas City, Kansas.

Sharpe, M.D., associate professor in the Division of Pulmonary, Critical Care and Sleep Medicine in KU School of Medicine, said he appreciated bringing bicycles to a school that otherwise might not have been able to afford them.

“It’s a great way to introduce a lot of these kids at a very young age to bicycling as a form of activity,” Sharpe said. “It’s never too young to plant that seed of development for healthy living and a healthy lifestyle.”

Burnett’s research focus is respiritory disorders including asthma, so he knows that children with asthma tend to decrease their physical activity, despite research showing that physical activity can improve asthma if symptoms are managed properly. He considered All Kids Bike a practical application of that research, benefitting those with asthma as well as those without.

“We thought, ‘This is a nice fit – here’s an opportunity for kids to remain physically active and learn a new skill by riding a bike,’ and then in adolescence, they can continue an active lifestyle,” Burnett said.

When the 25 bikes were delivered, Burnett, Sharpe and a handful of students from the School of Health Professions assembled and then delivered them.

Beverlee Brokeshoulder, physical education teacher at Rushton Elementary, said she’d never heard of All Kids Bike until Burnett approached her with the idea of bringing bicycles to her class.

“Introducing the students to bicycles in kindergarten is such a great idea. They’re so eager, and they aren’t afraid about falling or embarrassing themselves,” Brokeshoulder said. In another bike program, where the bikes were on loan to fifth graders, the physical education teacher said results were less energetic. “I was amazed at how many kids had never been on a bicycle before – in fifth grade. And then, for the kids who have had no introduction to it, they start feeling insecure and self-conscious. But in kindergarten, it’s a safe space.”

Brokeshoulder agreed with Burnett that bicycling can be a lifelong activity. “My dad is 86 years old, and he was riding those big three-wheeled bicycles. So, it’s definitely an activity you can do for a lifetime.”

In addition to the bicycles, which Brokeshoulder stores in her own office, she said she appreciated the connection to her neighbor, the University of Kansas Medical Center.

“We really appreciate the support of the medical center and its people. It’s fantastic, especially since the university is right here close. Community involvement really helps our kids,” she said.

With a successful rollout at Rushton, Burnett and Sharpe are considering ways to expand the program. “I think our future goals are to continue to work with Rushton and other schools near the medical center and in Wyandotte County,” Sharpe said. “The bike program creates the connection, and our hope is to piggyback on other things, such as healthy living and healthy nutrition.”