All of Us visits campus, seeking volunteers for nationwide study

The All of Us Research Program visited the University of Kansas Medical Center as part of its quest to collect biomedical data from 1 million individuals across the United States in the next 10 years. 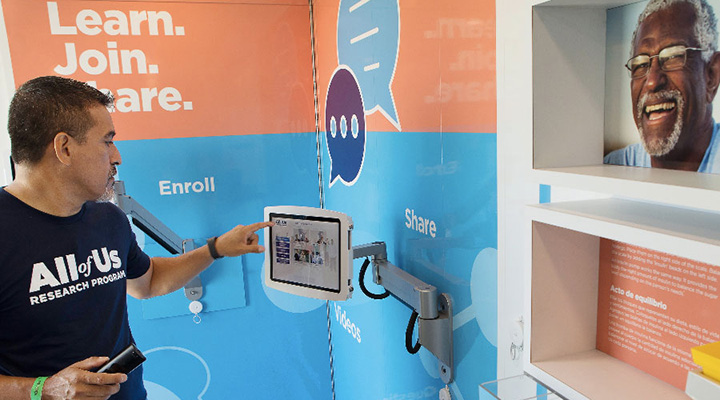 The All of Us Research Program visited the University of Kansas Medical Center Oct. 2 as part of its quest to collect biomedical data from 1 million individuals across the United States in the next 10 years.

Behind the bright blue signage of the traveling exhibit is the power and reach of the National Institutes of Health (NIH), which spearheads the program. Its goal is to enroll a diverse population of volunteers to provide health data. That data will then be collected in a centralized database and used by approved researchers to accelerate health studies and improve health care.

"All of Us provides a unique opportunity to participate in an ambitious study," said Akinlolu Ojo, M.D., executive dean of the KU School of Medicine. "The collected data and specimen will help countless researchers, such as the ones here on our campus, to avoid the time and cost associated with recruiting individuals for specific research."

Ojo was involved with All of Us prior to coming to KU, serving as principal investigator of the project at the University of Arizona. "The project will need many scientists to meet its goals, and I'm proud my efforts in the collaboration," Ojo said.

The traveling exhibit introduces visitors to the concept of precision medicine - defined by program materials as "health care based on you as an individual. It takes into account factors like where you live, what you, do, and your family's health history." By measuring environment, lifestyle and biology, All of Us is cataloging data that aims to improve precision medicine.

The average visitor spends about 7 minutes in the All of Us traveling exhibit, said Luis Astacio, tour manager. "But then some people say, ‘I only have a minute,' and they're still here two hours later."

Visitors can watch an explanatory video and participate in an interactive exhibit where aquatic rocks - like the kind at the bottom of fish tanks - represent precision-medicine data. The tour ends with time for questions. In places like KU Medical Center, the questions are often complex and scientific, Astacio said, "but we're here to talk to everyone."

As of September 2019, All of Us had acquired 268,000-plus volunteers of the promised 1 million. According to the NIH, only 300 (0.15 percent) are from Kansas, and 240 (0.12 percent) are from Missouri. Astacio said those numbers are bound to increase as the research program books more visits.

"We team up with local partners for this to be grass roots. But what we're finding is that it's much easier than we anticipated in that there's a real need for representation and diversity."
Ashley Tetlow, PhD student, in pathology and laboratory medicine in the KU School of Medicine, signed up to participate in All of Us during the recent visit.

She said she liked the idea of being part of such an extensive research project since she's a researcher herself.

When she sent in genetic data to the DNA analysis service 23andme, she chose to share with researchers her data from that service. But All of Us appealed to her because of its wider scope.

"The idea of getting a million people to reflect a population that's diverse - that's a real need in health care," Tetlow said.

Tawn McNell is not a scientist, but she, too, signed up. The local resident worked as promotion/education staff for All of Us. She participated early on, she said, because she saw the impact of scientific study on her twin boys. Born weighing only 3 and 4 pounds at birth, she enrolled them in a developmental study performed by Children's Mercy Hospital. The study was helpful, she said, because she received necessary support and intervention for her sons to achieve critical milestones.

Her twins are now grown and in good health. Enrolling in All of Us - and encouraging others to do so, too - is her way to contribute to the research community.

"I posted on social media, telling people to come, and I had friends from as far away as Las Vegas asking, ‘How do I sign up?'" McNell said.

Astacio advises all potential participants to discuss their enrollment with family members (who share that genetic information that might become part of the study) and to research the program.

Privacy of information is well guarded, but not guaranteed. "Ultimately, we're trying to give clarity to researchers for these future generations. And then you have to decide. We have the same level of security as bank-encrypted information," he said. "But banks get hacked as well. Is the program 100 percent? No. I don't know anything that's 100 percent."

One safeguard includes a real-time text notification sent to volunteers each time a researcher wants to access their information. Each person then gets to decide whether to be included, Astacio said.

For more information on the All of Us Research Program, visit www.joinallofus.org/tour.