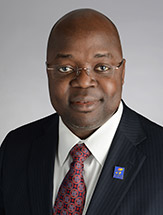 Abiodun Akinwuntan, Ph.D., MPH, MBA, FASAHP, FACRM, became the school's sixth dean in January 2016. He previously served as associate dean for research at the College of Allied Health Sciences at Augusta University in Augusta, Ga., where he was professor of physical therapy, ophthalmology, and neurology.

Dean Akinwuntan is a world-leading authority on the use of virtual-reality technologies to improve daily living activities in neurologically impaired persons. Akinwuntan has collaborated extensively on several funded grants totaling more than $15 million. He has authored more than 110 peer-reviewed publications and abstracts, mostly in reputable journals with high impact factors, and authored 8 book chapters.

He is also co-director of the Laboratory for Advanced Rehabilitation Research in Simulation.

Dean Akinwuntan is a recipient of the prestigious United States Fulbright Scholarship to Nigeria in 2013 and a Fulbright Specialist Award to Iceland in 2016. He is the editor in chief of The Nigerian Journal of Medical Rehabilitation, an academic editor of PLOS ONE Journal, member of the editorial board for the Archives of Physical Medicine and Rehabilitation Journal, and associate editor for Frontiers in Aging Neuroscience. He is a member of the nomination and elections committee and chair of the research, discovery, and innovation committee of the Association of Schools Advancing the Health Professions. Akinwuntan is treasurer of the Midwest Deans Group and also a member of the association's 2018 leadership development program.

He was elected as a Fellow of the Association of Schools Advancing Health Professions in October 2020 in recognition of excellence in and contributions to education in the health professions. In September 2021, Akinwuntan received fellowship status in the American Congress of Rehabilitation Medicine.

Akinwuntan is co-director of the Laboratory for Advanced Rehabilitation Research in Simulation (LARRS) which is committed to leading the field of rehabilitation science through state-of-the-art research and translation of research findings to improved health practices.